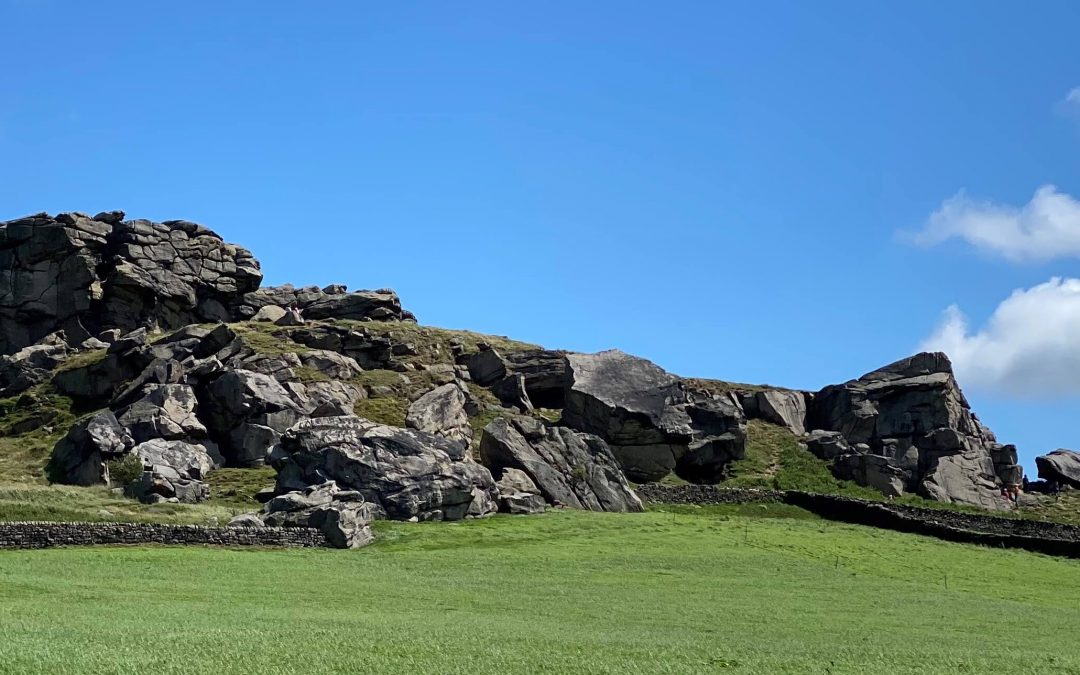 The distinctive rock outcrop or Tor of Almscliffe Crag can be seen for miles around and is well known by the residents of Lower Wharfedale and people driving between Otley and Harrogate.

Sitting on a small hill near North Rigton, the crag is made up of local Millstone Grit rock laid down during the carboniferous age about 300 million years ago. From Almscliffe Crag there are some great views in all directions with prime agricultural land, lots of sheep and cows on view.

During the last ice age, when a huge glacier carved out the U-shaped valley of Wharfedale, the very coarse sandstone of Almscliffe Grag, which is much harder than the surrounding rocks, didn’t erode as quickly so forming the iconic landmark we see today.

Being one of the largest Millstone Grit outcrops in the Pennines and because of its modification during the last ice age, the site has also been designated a Site of Special Scientific Interest (SSSI).

It’s not surprising then that Almscliffe Crag has a justifiable reputation for being one of the best climbing locations in the area. There are always climbers practicing on climbs which have been given such creative names such as the Parsons Chimney, the Black Wall Eliminate and even the Wall of Horrors.

It also turns out that Almscliffe Crag has been used many times as a location in TV series and was a main feature in the opening titles of Emmerdale Farm for a long time. But perhaps the strangest use of it as a location was when it became Planet Obsidian in an episode of the BBC’s iconic Sci Fi series Blakes 7.

SO WHERE DID THE NAME COME FROM?

It is interesting to find out that there are a couple of theories about the name. The first is that the Celtic word Al means fire and Mias, meaning Altar, have been combined. Some of the stones do look like altar stones and the location, visible from a distance, would suggest it could have had a ceremonial use in past times. On the other hand, in his book The Place Names of the West Riding, A H Smith notes that the rocks are documented as far back as the 13th Century when they were recorded as Almusclyve. Almus was a female name in early English so perhaps the rocks were named after a local maiden?

There is also some strange folklore associated with the place as detailed in Yorkshire Legends and Traditions, a book dating back to 1889 by Rev Thomas Parkinson and also referred to in Julian Cope’s Modern Antiquarian, where it is claimed that the location has always been associated with “the little people”, meaning fairies.

It is recorded that people believed in the past that the rocks contained a Fairy Parlour – with the entrance being a crack in the rock 18 inches wide. Another antiquarian and historian of Yorkshire, William Grainge, stated in one of his books “It has always been associated with the fairy people, who were formerly believed to be all-powerful on this hill, and exchanged their imps for the children of the farmers around. With the exception of the entrance to the fairy parlour, all the openings in the rocks are carefully walled up to prevent foxes from earthing in the dens and caverns within; and the fairies being either walled in or finding themselves walled out, have left the country as they have not been seen lately in the neighbourhood.”

So next time you visit Almscliffe Crag, whether you believe in fairies or not, I am sure you will still find it a truly magical place.

Thank you to Tim Barber for this piece.

Tim is a Yorkshire Blue Badge Tourist Guide and member of The Yorkshire Society. For more interesting articles about all things Yorkshire please visit his personal blog HERE.