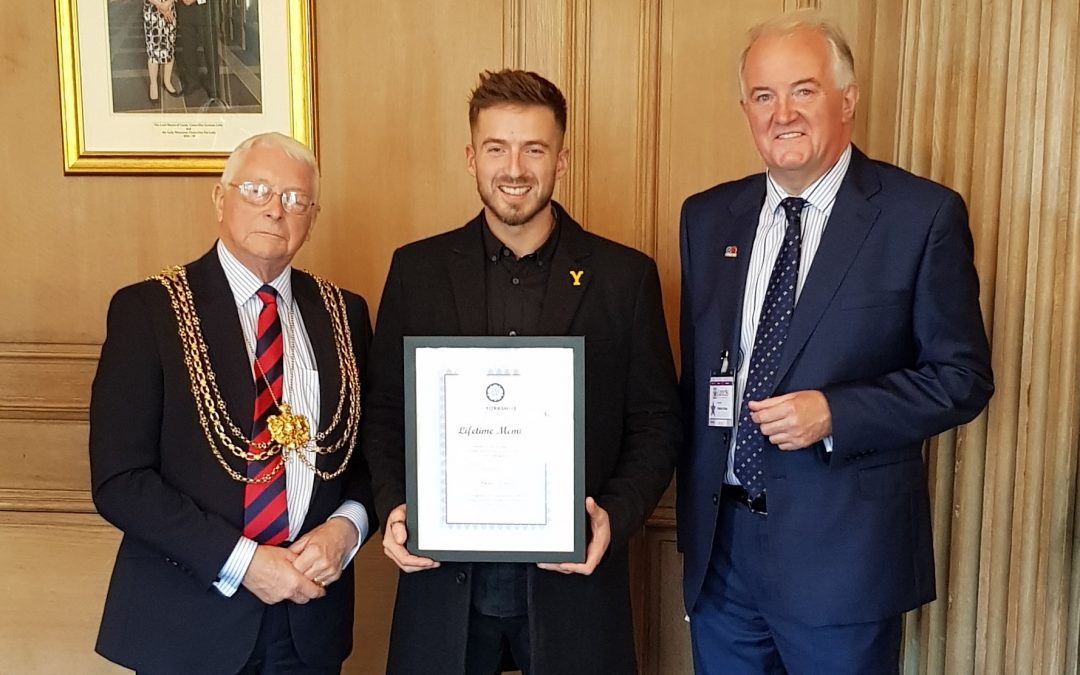 The Lord Mayor of Leeds, Councillor Graham Latty, presented Ben Davis of Harrogate with Life Membership of the Society today.

Ben has been gifted the membership as a result of his epic run around the border of Yorkshire to raise funds for CALM, the Campaign Against Living Miserably.

Setting off from Scarborough on Yorkshire Day, 1st August 2018, Ben ran the equivalent of a marathon a day for eighteen consecutive days, and with all his camping equipment on his back, until he arrived back where he started from having covered 470 miles and 41,000 feet of elevation – or up and down Everest in the process!

You can find full details of Ben’s run and the story behind it here.

A good turn out of Society members came to the presentation which was held in the Ark Royal room at Leeds Civic Hall, including the Chairman, Sir Rodney Walker, accompanied by Lady Anne Walker, his Deputy, Geoff Walsh, members of the Society’s Executive, other members and Ben’s own family and friends.

The Lord Mayor organised refreshments and a guided tour of the Civic Rooms conducted by the Sergent-at-Mace, and the Society presented the Mayor and Lady Mayoress with free couple membership in grateful thanks for making the event so special, for the Society and for Ben.

Ben also won the Man of the Year Award at this years Yorkshire Awards; the category sponsored by the Society. A report of the event can be found here.