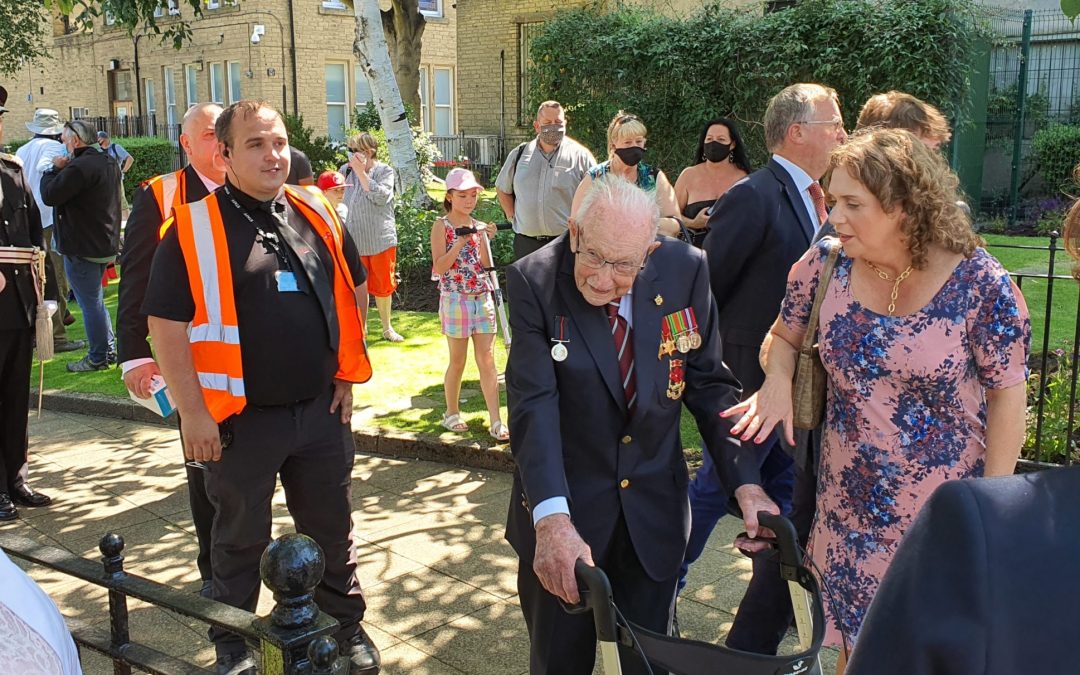 Capt. Sir Tom Moore made a visit to his home town of Keighley to receive the ‘freedom of the town’ on 31st July 2020 and honorary membership of The Yorkshire Society.

The weather gods were smiling on God’s own County for the day, and a visit that had been kept a close secret as long as possible quickly drew a large public audience as the Yorkshire Regiment took their place at the town’s war memorial; the scene of Capt. Tom’s arrival and where he unveiled a memorial to his fundraising efforts and visit. His first words as he stepped out of his car “It’s great to be back”.

Soon after, Capt. Tom was escorted around the war memorial that his own grandfather helped build. The Yorkshire Regiment provided a socially distanced guard of honour and Rev. Mike Cansdale, of Keighley Parish, gave a blessing while the media stood waiting patiently for their opportunity to talk to the now world famous Yorkshireman. When they did, he was everything we have come to expect; chatty, friendly and humble with a great Yorkshire sense of humour, which came into particular play during the formal presentations that followed.

Inside the Keighley Civic Centre, at a carefully organised socially distanced gathering, together with an invited audience comprising Keighley councillors and senior representatives of The Yorkshire Society, NHS, Fire and Ambulance services,  Capt. Tom listened with interest at the speeches praising his life and efforts, including a video presentation of a poem ‘One of our Own’ written specially for the occassion by Society Vice President Milly Johnson.

You can see the video HERE.

Sir Rodney Walker, Chair of The Yorkshire Society then presented Capt. Tom with honorary membership of the Society; He is the first honorary member in its 40 year history.

Finally, Capt. Tom was invited to speak and he was happy to do so. Without any notes or prompts he talked about his youth and many memories of life in Keighley; how it was his Grandfather and Grandmother who came to Keighley and started their family, and how he had eventually left the town in his forties.

Clearly, Keighley is dear to his heart and the freedom of the town was, he said, top of the list of honours he has received.

Our thanks to Keighley Town Council, and in particular Joe Cooney, Town Clerk, for their organisation of this event.