On August 1st Yorkshire Day, in Yorkshire and throughout the world, every true Yorkshire man and woman will be sporting a white rose, or hoisting the ‘national’ flag of the iconic white rose on its blue background.

But which is the true White Rose of Yorkshire?

Roses were cultivated in gardens in China and Persia as long ago as 500 BC,  a passion that spread to countries around the Mediterranean from Roman Times onwards.

The story of our particular White Rose is a fascinating one which can be traced back even before the 15th century Wars of the Roses.

There are two contestants for the original White Rose of York – the emblem of Plantagenet House of York.  The first is Rosa Alba Maxima, which many people have assumed to be the original White Rose of York.  But Dutch Rose historian Monique Nuijten in her excellent website (oldroses.nl) argues that if you examine old paintings, tapestries and portraits, the rose shown is not in fact the Alba Maxima, which only originated in the 16th century:

‘Alba Maxima’ probably originated as a mutation of the rose ‘Alba Semi-Plena’ and has the same smooth gray-green leaves that is so characteristic of the Albas. ‘Alba Semi-Plena’ is one of the oldest roses in the Western world and can be traced through old paintings to the 14th century……

‘Alba Maxima’ is often found in old cottage gardens in England. The double flowers are white with a hint of pink in the centre when first open and well scented. The branches bear few large, like most albas, straight thorns. This rose is sometimes prone to rust. It is said that ‘Alba Maxima’ is the white rose next to the red Rosa gallica officinalis, both of which have played a role in the English Rose Wars.

This is contradicted, because in old pictures it shows that both roses should have open flowers. Rosa gallica officinalis (the red rose of Lancaster) is that, more or less, but probably ‘Alba Semi-Plena’ is therefore the White Rose of York and not ‘Alba Maxima’. 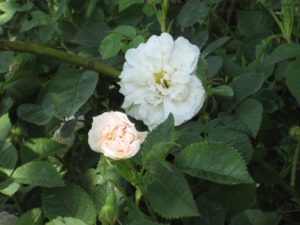 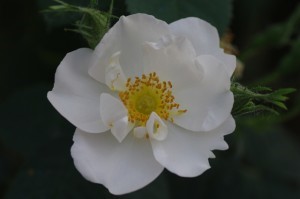 So, the heraldic White Rose of our flag and The Yorkshire Society logo is almost certainly based on a stylised, heraldic version of the more ancient Rosa Alba Semi- Plena.

The good news is that several growers of old roses in both the UK and The Netherlands grow and supply Rosa Alba Semi-Plena shrubs, the original White Rose of York – (see the RHS website).   The slightly less welcome news is that because old shrub roses of this type flower in late Spring and early summer, Rosa Alba Semi Plena isn’t likely to be around for August 1st buttonholes or bouquets – though there are plenty of superb, more modern varieties of white rose that are available at this time of year.

But you can always plant one in your garden and enjoy a living piece of horticultural history that links, in a vibrant way, with the story and identity of our region.

Thank you to member, Colin Speakman, for this piece.