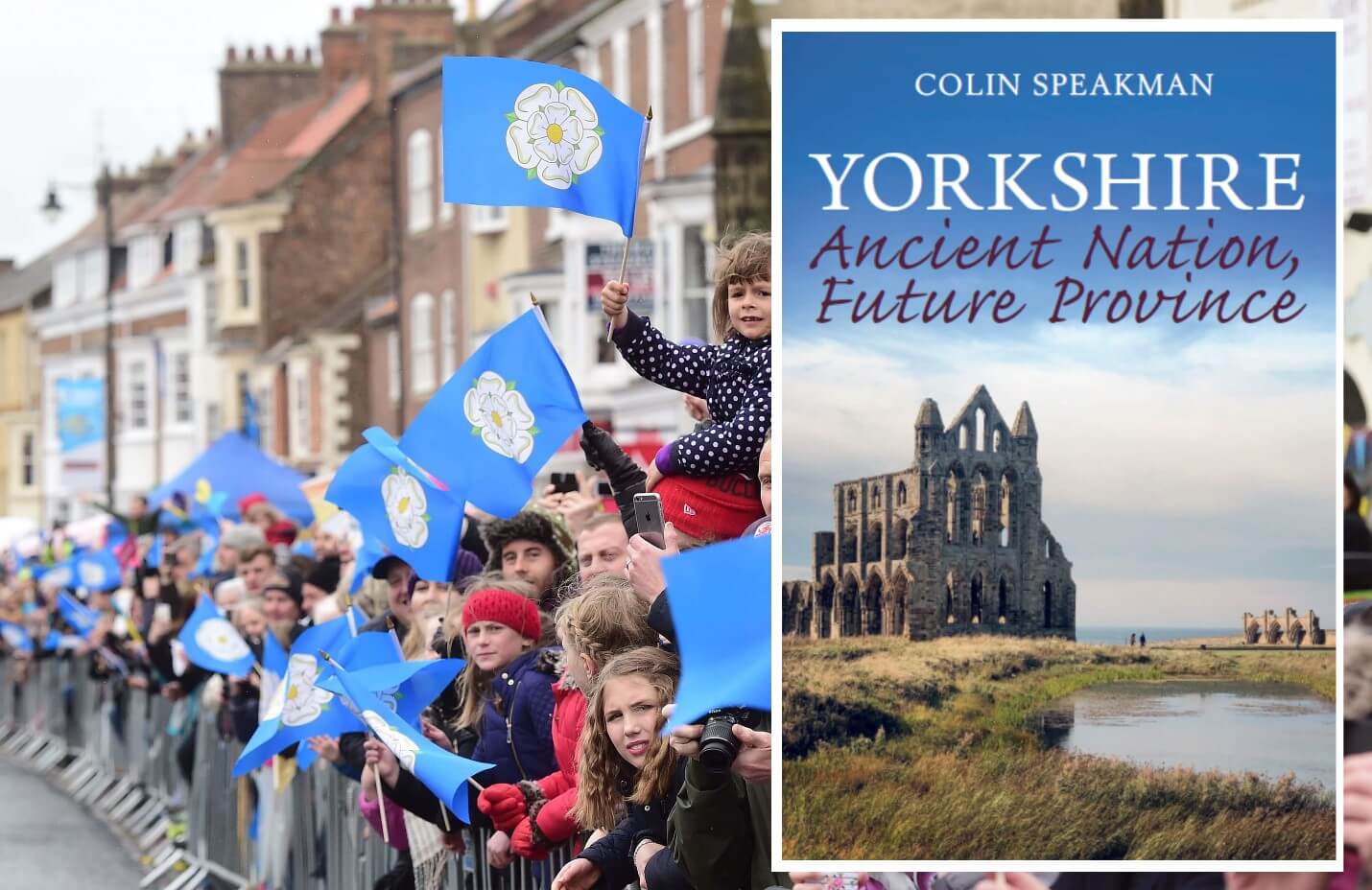 In the meeting rooms on the D Floor of the Richmond Building, University of Bradford, Bradford BD7 1DP

The path to Yorkshire devolution?

Could Yorkshire become England’s first semi-autonomous province? In a post-pandemic, post-Brexit landscape, Colin Speakman, author of Yorkshire: Ancient Nation, Future Province – which is being launched at the University of Bradford on November 17 – thinks so. As co-creator of the Dales Way, he’s well used to finding navigable routes across treacherous terrain…

Colin Speakman is probably best known as the co-creator (alongside the late Tom Wilcock) of the Dales Way, a 81-mile scenic trek – and one of the most famous ramblers’ routes in the UK – that wends its way from Ilkley, West Yorkshire, with linking paths from central Leeds, Bradford and Harrogate, all the way to Bowness-on-Windermere, Cumbria.

Along the way, it takes in some of the most breathtaking scenery in the world, striding up from its historic spa town starting point and then sweeping up and over the mountainous backbone of Yorkshire that is the Pennines, passing through such romantically named destinations as Appletreewick, Hebden, Grassington and Deepdale, before crossing into Cumbria.

In many ways, it is a journey that is all about transformation. Those who accept its challenge move from the burdensome confines of brick and stone to the boundless, borderless gaping wonder of windswept moors. In another sense, the Dales Way could also be seen as a metaphor for Yorkshire devolution, and that is the subject of Mr Speakman’s latest book, Yorkshire: Ancient Nation, Future Province, published by the Gritstone Publishing Cooperative. Part polemic, part manifesto, it even boasts a foreword from the newly elected Mayor of West Yorkshire Tracy Brabin.

Mr Speakman, now 80, wastes no time in revealing the planned destination, pointing out that Yorkshire is as populous as Scotland (both have 5.4m inhabitants), is more populous than Wales, but in terms of GDP per head succeeds less well than many comparable mainland European countries.

In the book, he asks: “Is there now a distinct possibility that even the four hundred-year-old idea of ‘Britain’… may have to change?”, before taking us on a brief but illuminating history of Yorkshire from Roman settlement, through to Viking and Norman invasions, the War of the Roses, and the historic origins of Yorkshire’s enigmatic White Rose (look up the Battle of Minden, 1759), right up to the still-reviled local government reorganisation of 1974, which saw the abolition of the famous and emblematic Ridings.

Speaking ahead of the launch event, Mr Speakman, who was awarded an honorary doctorate by the University in 1997, says: “The book is about devolution but it’s also about Yorkshire, its people, its landscape, its huge strengths and resources, and the fact much of this is mismanaged by central governments of whatever political colour. We are as big as several European countries and yet we’re held back by a neo-colonial attitudes from Whitehall”. There. He said it. So much for taking the scenic route.

While his latest book (he has authored more than 60) is dense with the foliage of Yorkshire’s history – with engaging detours into its people and places – from writer Michael Bradford (The Fight for Yorkshire) and poet Ted Hughes to Stoodley Pike obelisk and the Gothic folly hiding in Hackfall Woods – it yet outlines a path to deliverance from what he calls the ‘nostalgic imperialist’ mindset of government by London.

“Post-Brexit and post-pandemic, the world has changed,” says Mr Speakman, who recently received a Lifetime Achievement Award from the Outdoor Writers and Photographers’ Guild (previous recipients of their awards include Sir David Attenborough, Chris Packham and Bill Bryson). “We’re at a moment of change. West Yorkshire is the biggest conurbation in Europe without a modern light rail transport system, there have been no new rail lines created in Yorkshire since the Beeching Cuts in the 1960s. This is a cry for hope but also a rallying call for devolution. The ideal would be to have some sort of Regional federal structure the way they do in parts of Germany, Switzerland  and Austria.

“We need to have pride and confidence in who we are. I wanted to launch this book at the University of Bradford because in many ways it celebrates the change that needs to take place – this was one of the first ‘technology’ universities, this is where our hope for the future lies – it will be the young people of today who bring about the changes of tomorrow. In terms of entrepreneurship and regeneration, I think the University of Bradford is one of the places where things can and will happen. For me, this is what it’s all about.

“Being from Yorkshire is not about being born here,” he continues (and as a Lancashire-born adopted Yorkshireman, he should know). “It’s about our shared culture and where people’s hearts are. If we can celebrate and strengthen this, we can achieve political change.”

Mr Speakman sees Yorkshire as a brand – like Normandy in France or Bavaria in Germany – and one which would ultimately strengthen a federal ‘England’ (even if Scotland and Wales ultimately decide to go their own way). Specifically, he sees Yorkshire’s White Rose as a powerful unifying symbol, a rallying point for future change.

As he says in the book: “A process of voluntary self-identification is… the best way to bring Yorkshire people together into a Cultural Province of Yorkshire. This will ensure that, sooner or later, legislation to formalise this recognition will follow. Yorkshire as a state of mind as well as a place, something and somewhere people can opt into, to choose to belong to, not be ordered to by fingers on a beaurocrat’s keyboard. Ultimately, that will be its appeal and power.”

Yorkshire: Ancient Nation, Future Province (out now, priced £12.50) is many things: part history, part tour-guide, and it may well be one more step along the path to realising Yorkshire’s dream of independence.

Colin Speakman is a keen walker and environmental campaigner, and the author or co-author of over 60 outdoor books. These include The Dales Way (now in its 11th edition), and walking guides to areas both in the UK and in mainland Europe, as well as poetry, topography, biography, transport history, and two literary anthologies.

The book launch will take place on November 17 from 2.30pm, with a chance to talk to Mr Speakman and others associated with the campaign for Yorkshire independence.