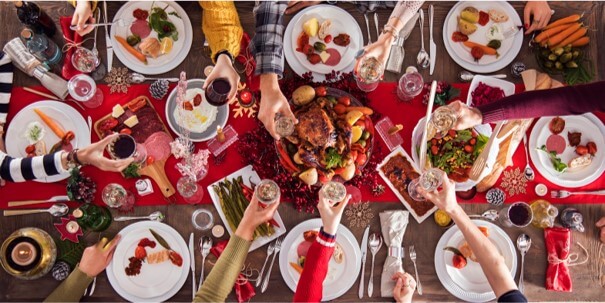 People travel from far and wide to experience a traditional Yorkshire Christmas, with many of our older towns and cities decking themselves out to create a proper Dickensian Christmas.

Our stately homes and grand houses often re-open, decorated  for the festive season to create magical experiences for visitors, German markets come to life and carol concerts and brass bands perform at heritage sites to help add Christmas cheer. It remains to be seen this year how much the pandemic will effect these plans but we are hopeful that Yorkshire will still be able to create in the words of Paul McCartney – “a wonderful Christmas time”.

At The Yorkshire Society one of our aims is to promote and celebrate all things Yorkshire, so with this in mind we thought readers may be interested in the part Yorkshire has played in creating a Christmas feast.

To start off – the tradition of tucking into a succulent roast Turkey on Christmas Day is taken as a given for most families. But did you know without the help of a Yorkshireman we may have been tucking into something less appetising?

So, a big thank you to William Strickland, born on the Yorkshire Coast who brought the first Turkey back to Britain in 1526. Folklore has it that Strickland acquired six turkeys from Native American Indians during one of his expeditions to America. He sold them for tuppence each in Bristol and the success of these first sales led to him continuing in the Turkey trade.

Apparently, he made so much money from importing Turkeys that he built Boynton Hall, a grand stately home near Bridlington and later became an MP off the back of his success during the reign of Elizabeth I.

Whilst people had traditionally had a bird such as a goose or pheasant as a special treat for their Christmas Day meal, Turkeys started to become popular as part of a Christmas feast during Victorian times – you may even remember Bob Cratchett in “A Christmas Carol” was bought a Turkey by Scrooge. Nowadays 76% of UK families serve up a Turkey as the centrepiece of their festive meal.

A bird in the hand

The five-bird roast has become popular at Christmas in recent years – usually consisting of a Turkey, a Duck, a Cockerel, a Pheasant and a Partridge stuffed inside each other. But the origin of this dish is based on the Yorkshire Christmas Pie, a dish which was first mentioned in the 1600’s which again, became very popular during Victorian times.

The recipe included game birds and fowl such as Turkeys, Pheasants, Pigeons, Duck , Partridge, Grouse and Goose served in a delicious crusty pastry pie. The game birds were sourced on the local moorland around Yorkshire and reference to it being made in the kitchens at Harewood House are recorded in their kitchen manuscripts. The dish became popular with wealthy landowners which led to A Yorkshire Pie being served at Christmas to Queen Victoria at Windsor Castle in 1858.

Another Christmas tradition in Yorkshire which does not seem to have caught on outside our region is that of eating a slice of cheese (preferably a crumbly Wensleydale) with your Christmas Cake. The sweetness of the fruit combines well with the creaminess of the cheese. People eat fruit chutneys with cheese but don’t seem to be able to make the leap to trying it with fruit cake, although more recently it has been spotted on the menu at some upmarket restaurants in the capital.

We feel sorry for those who are still yet to sample this delicious Yorkshire delight!

To pud or not to pud?

Last year, a couple of newspaper articles tackled what they called the “most divisive issue when it comes to Christmas Dinner”. But what was this great issue that was causing so much debate? Well, it was whether the humble Yorkshire Pudding should be included on the Christmas dinner plate.

The Manchester Evening News (even though based across the border in Lancashire) ran a poll to come up with a definitive answer. The answer they came back with was what us Yorkshire folk already knew – with 87% in favour and one reader stating “of course they do, they go with everything!”.

Yorkshire Puds were originally served as starters to fill people up before their main course when times were hard. There are records of this taking place at the Christmas dinner table with the same principle, so whilst nowadays across the UK, Yorkshire Puddings are often served with a roast beef dinner, here in God’s own county we are so partial to this local delicacy that we believe it is perfectly acceptable to eat them on Christmas day ( or any other day for that matter!).

We hope this article has stimulated your taste buds and given you some insights as to Yorkshire’s influence on Christmas food.

Thank you to member Tim Barber for this article.