Help us to bring the Red Arrows home to Yorkshire.

The Yorkshire Post recently reported a bid to bring the home of the world famous Red Arrows to Yorkshire; something the Yorkshire Society is keen to support.

Conservative MP for Richmond, Rishi Sunak, the man behind the bid suggested RAF Leeming in North Yorkshire as the ideal fit for the world famous Red Arrows, the Royal Airforce’s Aerobatic Team of pilots, engineers and support staff.

The Royal Airforce is in the process of choosing a new location for the Red Arrows because a decision has been made to close their current base at RAF Scampton in Lincolnshire. Mr Sunak has written to Scarborough-born Defence Secretary Gavin Williamson pointing out that RAF Leeming was already home to 100 Squadron flying Hawk T1 fast jets, which are the same type of aircraft used by the Red Arrows. Recent improvements to the local infrastructure, including a £400m upgrade of the A1, has given the base better access to the motorway network and there have been improvements to local roads too thanks to the new Aiskew-Bedale-Leeming bypass.

So, there is good sense in a move to Yorkshire. But, more importantly (of course) is the ‘logic’ of placing such a national treasure in a County most noted for it’s inherent pride. With that in mind, the Society contacted Rishi Sunak to offer its support.

What can we do?

The Society will lobby where it can, but members can play their part too and Mr Sunak has asked us – members – to get behind the campaign by writing letters to the local media, in particular The Yorkshire Post, The Northern Echo and Darlington and Stockton Times. But why stop there, feel free to write to the RAF themselves and your MP so everyone concerned gets the message “We want the Red Arrows”! 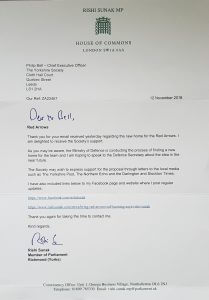