Our youngest member has sent a report of his recent trip to America. 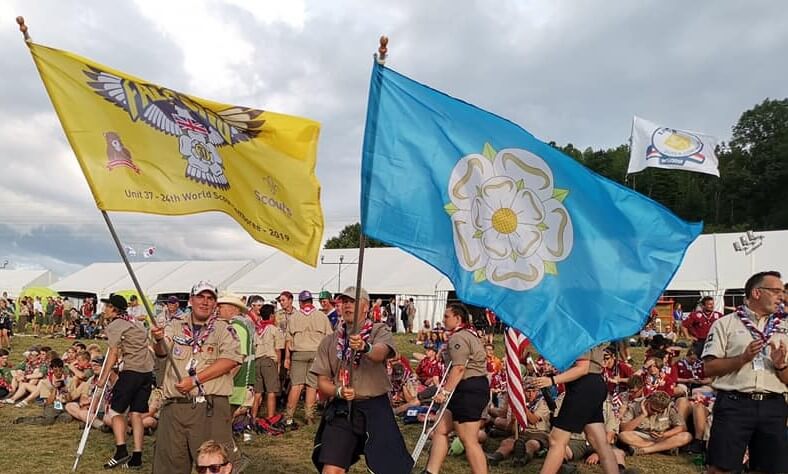 Oliver Rhodes contacted the Society to tell us he was representing Yorkshire at an international scouting jamboree, and so would be celebrating Yorkshire Day in the USA. So, we gave him a Yorkshire Flag and a supply of Pontefract Cakes and asked him to tell us all about it when he got back. Below is his report and Yorkshire can be proud to have had such a good ambassdor.

Dear Yorkshire Society
We flew from Leeds Bradford to Heathrow, then Heathrow to New York. I haven’t flown long distance before. I quite liked it, the food was ok. When we landed, we went then to Hofsatra University where we stayed overnight. The next day was sent sightseeing in New York. What a place! I am trying to persuade Mum and Dad to take me there for my 18th.

From New York we travelled by coach for eight hours to West Virginia University, where we stayed overnight, before hitting the road for the remaining journey to the sub camp. What an experience, we attend the opening ceremony with 48,000 other scouts. The drone’s formation was mind blowing. I lost my voice from joining in with songs, chants and dancing. We were based on the Alpha Anjar sub camp, I shared a tent with my friend Isaac for two weeks. My camp was a twenty-minute walk to the centre point, so I got in lots of steps and some large blisters. I completed all sorts of activities from climbing to my favourite activity, team paddle boarding. I have tried all sorts of things I haven’t done before some I won’t have the opportunity to do again. My favourite day was Culture day, I explored different culture and faiths, different types of food, and had the opportunity to meet and talk with other scouts from around the world. The day was rounded off by no ordinary show, four signers had flown in from New York and they were all Broadway stars, signing the hits from Disney, this was really interactive with a massive sing along event. My unit organised a slip and slide hockey tournament. Almost all of camp A4 came to play and it was a great laugh, Denmark Sweden, Italy Malaysia and French all brought teams and challenged us as hosts. Another great memorable evening.

We took it in turn for each patrol to cook. Breakfast due meant getting up at 5.30am with a walk there and back from the supermarket and then prepare breakfast for the rest of the Unit. The Jamboree came to life at night! We had many themed nights, superhero’s, Mexican Canada and US nights. Our last day was Yorkshire day, as I proud Yorkshire lad I wore my Yorkshire lad t-shirt and wore my flat cap. Our Yorkshire flag had been flying high all camp, but this had extra meaning that day. I spent the day trading Yorkshire badges with other scouts from all over the world, telling them all about my wonderful county. We had a closing ceremony that evening my patrol walked into the stadium waving the mighty Yorkshire Flag and it flew all evening during the fireworks and laser shows. The weather was bizarre, oppressive heat 27-30 degrees until mid-afternoon, then downpours for about 15 minutes, with hail stones then back to normal. There were some moments where the natural beauty of West Virginia shone through. 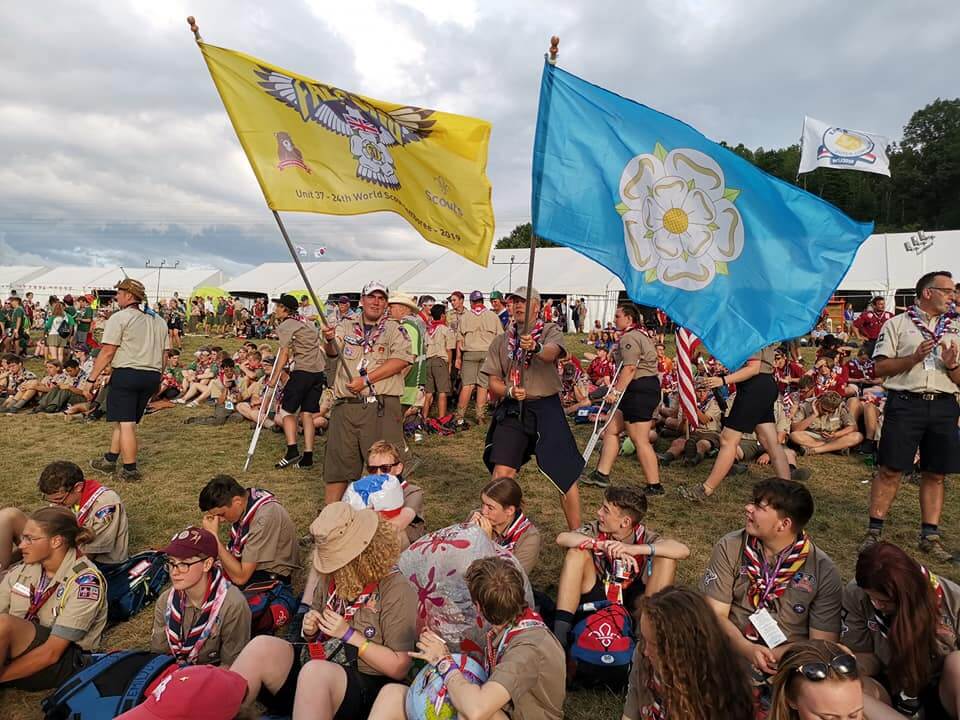 After two weeks we were onto the final leg, DC and Toronto. We had a five-hour drive to Maryland University, this seemed to go in a flash, spending most of it a sleep. The University was nice and became home for three night. I got to wash and dry all my clothes in a washing machine. I even remembered to sperate my colours – mum was impressed!  We explored Washington by night. Travelling together on the subway started our adventure, we were excited to see some places we recognised. During our day in Washington DC we split into smaller groups and explored this great city, visiting museums, monument’s and a little shopping. The next day we went in a convoy of 100 yellow school buses to Baltimore for our baseball match, we soon learnt not to says it’s a version of rounders because the locals take it very seriously. The game was the local baseball team, the Orioles taking on the Toronto Blue Jays. The stadium was massive and a first experience for some of us. I didn’t fully understand the rules, although seeing all 5,000 strong UK contingent singing was a spectacle sight, we have even made a baseball players Wikipedia page.

We then had a ten-hour coach journey to Toronto, Canada. Our coach driver took a short but long detour across the Rainbow Bridge to have a look at Niagara Falls. It took over four hours to cross the border from the USA. On the first day we had a leisurely morning on our campsite this morning. We stayed in a traditional campsite, sleeping in lodges, with back to basic amenities. The next day was spent in Toronto, saw the CN Tower, the Toronto Blue Jays stadium and dis some underground shopping.

Our last night was a campfire where we sang songs. On our last day we presented our coach driver Chuck-Poppy Morris with a signed Falcons (my Unit) sweater. Then just like that we were heading home. We cleared security at Toronto airport and made our flight. We were delayed leaving Heathrow and spent 45 minutes circling Leeds Bradford, waiting for the fog to clear.

As you can see some wonderful memories and friendships were made to last a lifetime. But if there is one thing, I’ve learnt from being away from three weeks, it’s how grateful I am for what I have. Things that are so easy to forget.