Pontefract – a Yorkshire town at the centre of Northern history 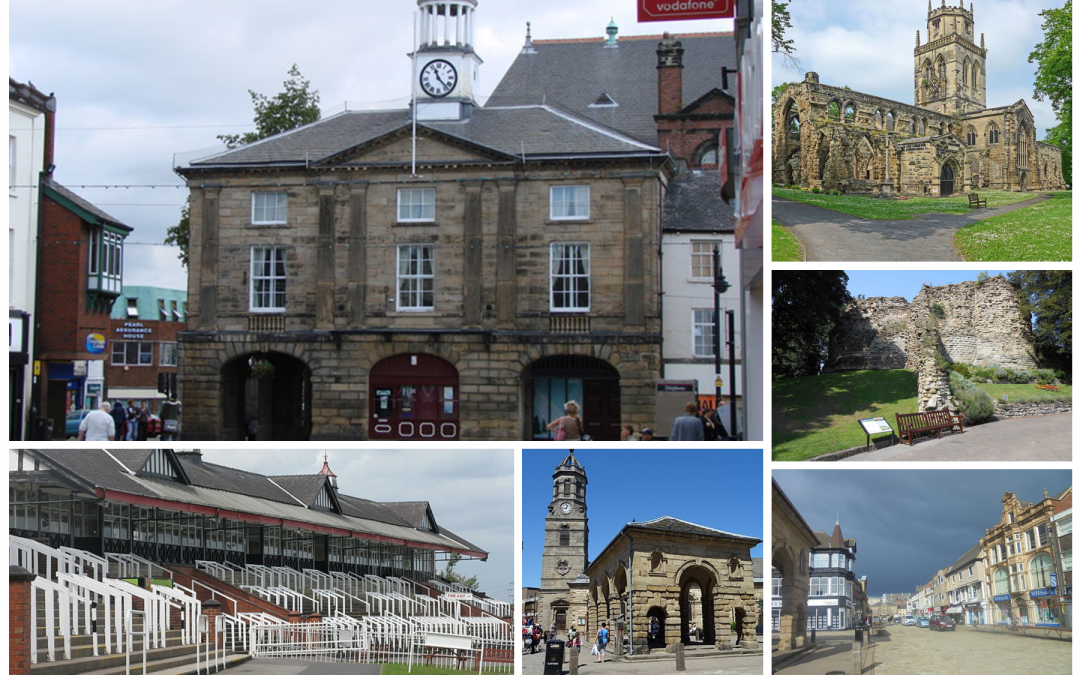 “The Key to the North” – this was how generations of English Kings and politicians regarded Pontefract, lying as it did at a strategic point on the Great North Road, since Roman times the main highway and artery of communication between the English Midlands, Southern Counties and the often rebellious North.

It was the Norman invaders who, in the 11th century, transformed land to the north east of the little Anglian village of Tanshelf into a major military and civilian settlement, supporting a mighty Norman castle to subjugate the North.

It is said that the name “Ponte-fract” meaning literally in Norman French  “broken bridge” came from a wooden or perhaps even stone bridge over the River Aire a couple of miles away, probably somewhere near modern Ferrybridge where the Wash Dyke joins the Aire.  Legend has it the bridge was deliberately destroyed by the rear-guard action of Jorvik (Yorkshire) Anglo-Viking soldiers in 1068, resisting the ruthless Norman army destined to carry out the burning of York in the genocidal Harrying of the North.

The Castle was both a symbol of that military domination and the political centre of local baronial power, built to enforce the authority of the Norman overlords. 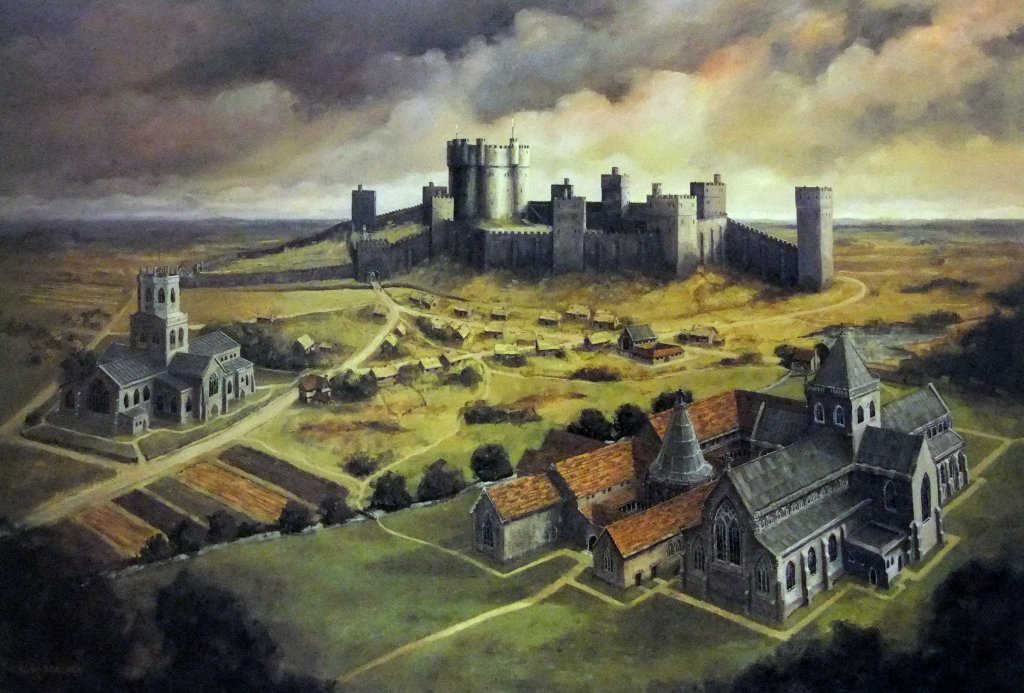 It was built around 1070 by Ilbert De Lacy, close confederate of William the Conqueror who granted De Lacy huge areas of land in the so-called Honour of Pontefract, extending right across the South Pennines. The castle was extended and added to over the centuries to become one of the greatest and most feared castles in England. It was within its walls that King Richard II was imprisoned and died in 1400.  The castle was served by a small garrison town and market which took the name Pontefract from the castle. For centuries the De Lacys remained a hugely powerful family. In 1215 John de Lacy, Baron of Pontefract was one of the 25 Barons to sign the Magna Carta, a fact still celebrated in the town.

Even during the English Civil War, the castle remained impregnable, surviving two Parliamentary sieges before finally succumbing, in 1649, three months after the execution of Charles I. With the support of many of the townspeople of Pontefract who saw the castle as a symbol of military oppression, and who petitioned Parliament, Cromwell’s men were ordered to “slight” or destroy the castle, leaving it the ruin we see today, with only a couple of towers left partly standing plus a dungeon. Now, managed by Wakefield Council, the Castle ruins form a fascinating place to visit, with a powerful sense of history and a place to relax with magnificent views across the town and the lower Aire valley. 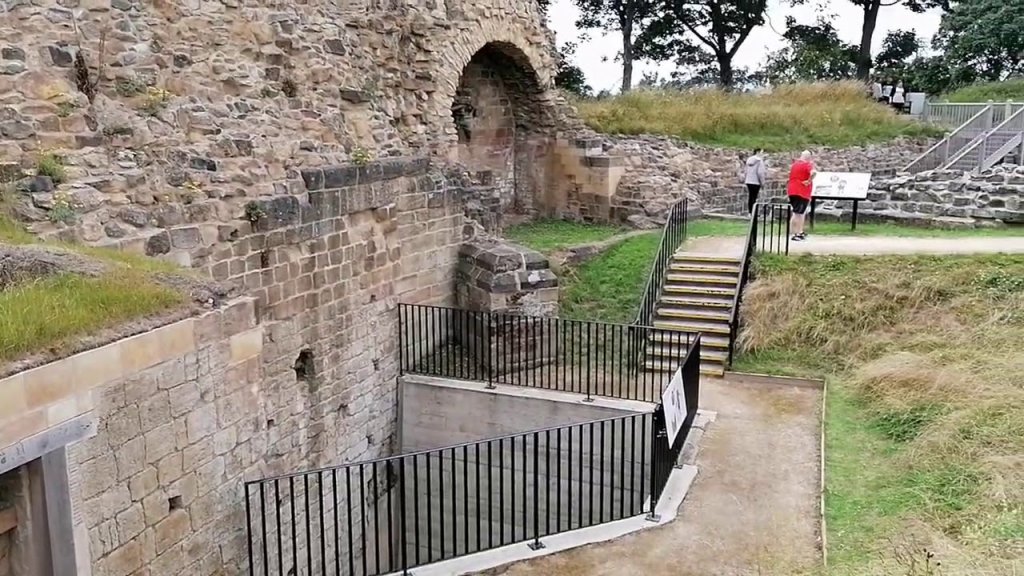 Because of its strategic position on the Great North Road – the highway we call the A1 (which now by-passes the town) – by Tudor and Georgian times, Pontefract soon became an important market and trading centre, with many fine coaching inns, several of which survive today in the town centre. The fine neo-classical Town Hall dates from 1785, whilst the adjacent Assembly Rooms, where the fashionable attended elegant balls and soirees, was built in 1882

Industry was growing in and around the town at this time, including the large-scale manufacturing of sweets, most intriguingly because of the importance in the local economy of a herb from the Mediterranean first introduced in the town through local Dominican monks in the 12th century – liquorice. Sweets made from liquorice grew from a niche product to a hugely popular Victorian treat, with dozens of local farms growing the root for the new companies that grew in the town such as Bassets, Wilkinsons and Dunhills, producing such national favourites as Pontefract Cakes and Liquorice Allsorts on a huge scale, a tradition continued in the town by the international manufacturer Haribo.

But in the 19th and 20th centuries another major industry was soon to surround Pontefract – coal mining, the town lying on the rich Yorkshire coalfield. This cheap form of energy also encouraged the growth of the glass making industry which even after the decline of mining flourishes in nearby Knottingley. The town was now a busy centre of manufacturing and mining and its character inevitably changed with much badly thought through unsightly development in the 1950s and 60s, together with the demolition of many historic buildings and an intrusive new relief road to the west of the town.

But in the last few decades, things have changes dramatically. Thanks to the work of Pontefract Civic Society and more sympathetic local authorities and government agencies such as English Heritage, many of the town’s fine surviving buildings such as the Buttercross and Parish Church have been restored, and streets in the central areas with such evocative names as Micklegate, Beast Fair, Shoe Market and Cornmarket, carefully pedestrianised to restore a sense of scale to be enjoyed in a traffic free environment. As well as a covered Market Hall, the historic Wednesday street market flourishes too. Many of the ancient alleyways or ginnels now boast specialist shops and popular eateries, whilst the elegant courthouse or Sessions House now contains antique shops and a popular first floor café and coffee shop.

Pontefract’s small but very informative Museum is housed in an art-nouveau building, itself of architectural interest, with exhibits relating to the Civil War and past industries such as medieval pottery, the early liquorice cultivation and glass making, as well as more recent developments.

Members of The Yorkshire Society’s Heritage Guardian network will be enjoying a unique insight into Pontefract’s amazing history on March 23rd with a special Heritage Guardian summit event of talks and networking, with a rare chance of a guided tour round the historic Town Hall and Assembly rooms and Pontefract’s historic town centre.