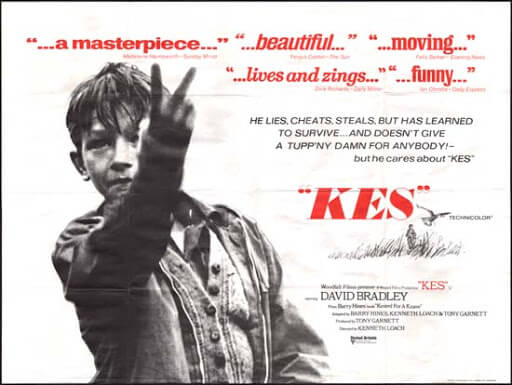 Kes is a classic piece of Yorkshire culture and this brilliant film has now been ranked 7th in the British Film Institute’s list of its all-time top 10 British films.

My relationship to this film goes back to my infant school where we were shown the film and David Bradley who played the lead role came into school to talk to us at an assembly. Since then, my son (now 21) ended up playing Billy Casper in a scene from Kes at a school drama festival at Skipton Town Hall, the footage of which I still have somewhere filed away on minidisk. More recently I have become a trustee of Leeds oldest charity (Wade’s Charity) where one of my fellow trustees is Bernard Atha, former actor and once Mayor of Leeds who played the role of the Careers Master in the film.

Kes was directed by Ken Loach, now famous for his gritty Northern dramas and it came out in 1969. As mentioned it was based on a novel by Barry Hines called a Kestrel for a Knave, which had come out a year earlier and Kes was actually Loach’s second feature film.

The plot focusses on fifteen-year old Billy Casper who is picked on at home by his physically and verbally abusive brother Judd and at school by schoolmates and teachers alike. With attention deficit and little future prospects his mother even describes him as a “hopeless case”.

Billy takes a kestrel from a nest on a farm and ends up stealing a book on falconry and proceeds to build a strong bond with the bird. The training of the bird gives Billy purpose and as  the relationship with the kestrel improves so Billy’s outlook expands to the point of receiving praise from his English teacher after delivering a mesmerising speech about training the kestrel to his class.

The kestrel represents freedom, hope, enlightenment and grace and I see Billy wishing he was the kestrel – able to fly away from his mundane life.

Sadly, the positivity in his life is shattered when after not placing a bet for his step-brother, where the horse romped in a winner, Judd takes revenge and kills Billy’s bird. Billy is last seen burying the bird and burying it on the hillside overlooking where he trained the bird.

The book and film take place in South Yorkshire around Barnsley and depict the grim realism of the mining areas which were the scene of some of the worst depravation in the country with wage restraints and pit closures. For added realism the film used authentic Yorkshire dialect and extras which were hired from the local area. This led to subtitles being used on the film’s American release.

The film features cameos from British actors such as Colin Welland and Brian Glover, who plays a vindictive PE teacher, Mr Sugden, and a classic scene involving a school football match where Glover joins in, pretends he’s Bobby Charlton as well as the referee, and attempts to cheat to victory. His team lose 2-1 after Billy misses an important save causing Billy to be tortured by being forced to have a freezing shower.

50 years on the film is still a classic remaining relevant today and a timeless tale of a down-trodden community and an unfair world. 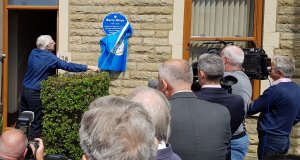 Back in 2019, at the instigation of Society Vice President Milly Johnson, The Yorkshire Society unveiled a blue plaque in honour of Barry Hines, author of A Kestrel for a Knave on which the film Kes was based. You can read a report here.