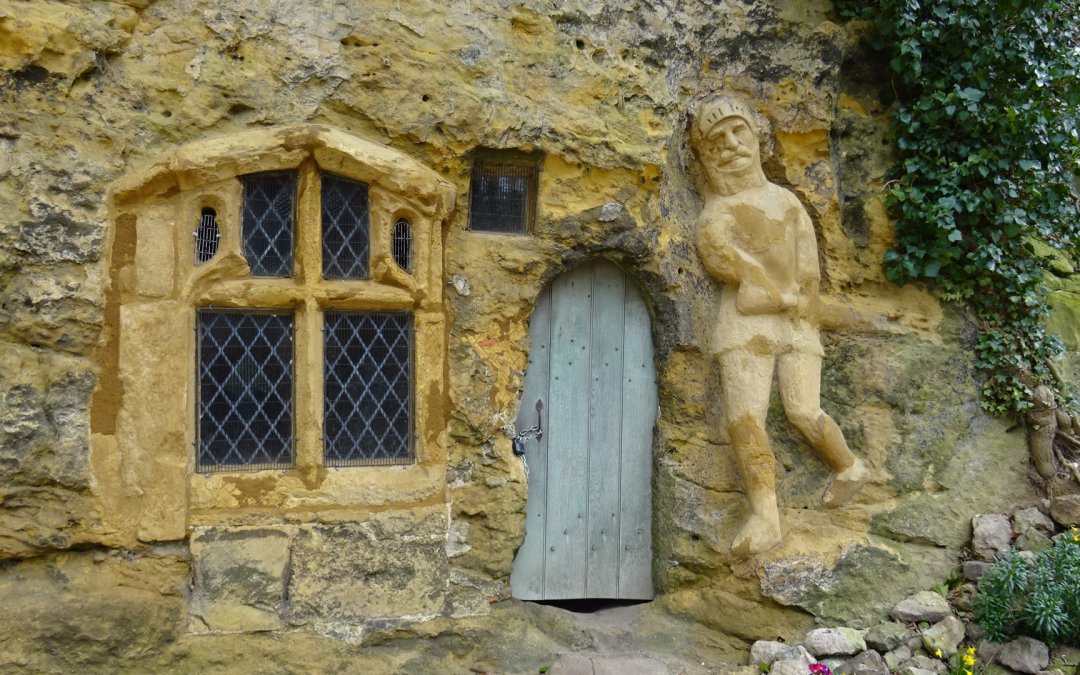 One of the strangest and most interesting historic sites in the region is The Chapel of Our Lady of the Crag, a small chapel carved into the rock in Knaresborough. Sometimes known as “The Chapel in the Rock”, this building dates back to the 15th century and has been carved into the solid cliff face on the Abbey Road beside the Nidd Gorge.

It is known as a Marian shrine in honour of the Virgin Mary and is Grade I listed. 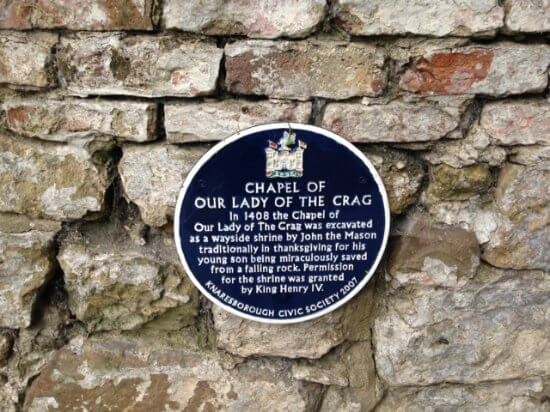 The story behind the structure is a bit sketchy, but there are records of someone known as John the Mason getting permission to build the chapel in 1408. In records during the reign of Henry IV it states, “John Mason received from the lord a piece of waste land below the quarry with licence to excavate there beneath the quarry in order to make and hold a chapel, which he and his assigns are to have and to hold for the term of their life for an annual rent.”

No-one really knows much about John the Mason, but with a name ending in “the Mason” it is assumed that John was working in Knaresborough repairing the castle or the parish church.

The sandstone cliffs next to the river had been quarried for stone for the castle and church so John the Mason would have been familiar with the setting. But what made him decide to apply for permission to build a chapel into the cliff. 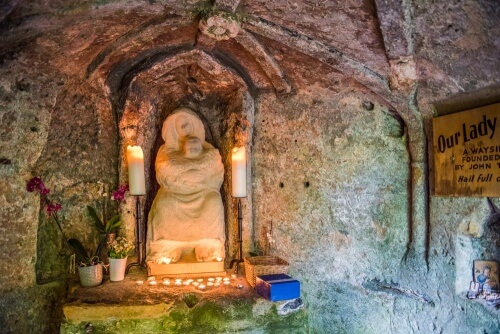 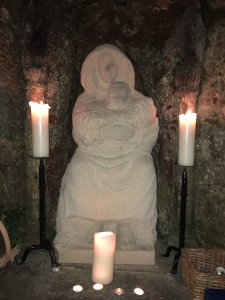 Legend has it that John the Mason was at the quarry working and his son was playing close- by when part of the cliff collapsed and caused a sudden rock fall. John was too far away to reach his son who was in mortal danger so cried out to the Virgin Mary for help. The rockfall changed direction and just missed his son who remained unharmed. John was so grateful that he decided to build a chapel into the solid rockface in gratitude for his son being saved from death.

This is a great story, but some believe it is a later myth and a more realistic reason was that John being a tradesman, he built the shrine to show off his skills as a mason to potential clients. Think more medieval advertising! Knaresborough at the time not only had a castle and church, but also a priory. There was lots of work for a mason around the town and maybe John was just being commercial? When you see the chapel carved out of the cliff, you realise the time and effort which went into the project to dig out the solid rock. It does ask questions as to whether the project was sponsored, as could a mason have afforded to have taken on such a project without funding

The Chapel in the Rock was on the route to now demolished Knaresborough Priory and is known to have acted as a wayside shrine for visitors to the Priory. There would also have been a number of men working in the cliffside quarries and they too would have used the shrine as a place of worship.

One of the most distinctive features of the chapel is a figure of a Knight carved into  the rock just to the right hand side of the entrance. The knight is life size and it is fair to say it wouldn’t win any awards for being life like. It is believed by most that the carving was done at the time of construction but the head has been re-carved by Victorian meddlers.

To the left of the doorway is a strange mullioned window adding some natural light into the cave.

The chapel itself is not regularly open to the public, but visits can be arranged by special permission. I was lucky enough to have had chance to go inside the small chapel and the inside is a fascinating place.

The roof has vaulting is original and has an interesting carved ceiling boss in the shape of a Yorkshire rose which is probably later. There is a carved altar and columns carved in to the rock as well as niches where religious items were on display such as candles and crosses. A small carving of Mary and Jesus from the year 2000 now sits on the altar.

There is also a strange carved elongated medieval head carved in to the rock, perhaps to signify Jesus.

During Henry VIII’s reformation, the Chapel ceased to exist as a chapel. In 1916 it was re-consecrated as a Catholic place of worship and came under the ownership of the famous Ampleforth Abbey.

A sad finale to this piece is that the Chapel was subject to vandalism with the glass window being smashed in 2019. The glass was not original and has now been repaired with donations from the people of Knaresborough.

Thank you to Society member Tim Barber, Real Yorkshire Tours, for this article.