The story of a Society member helping school children in Uganda 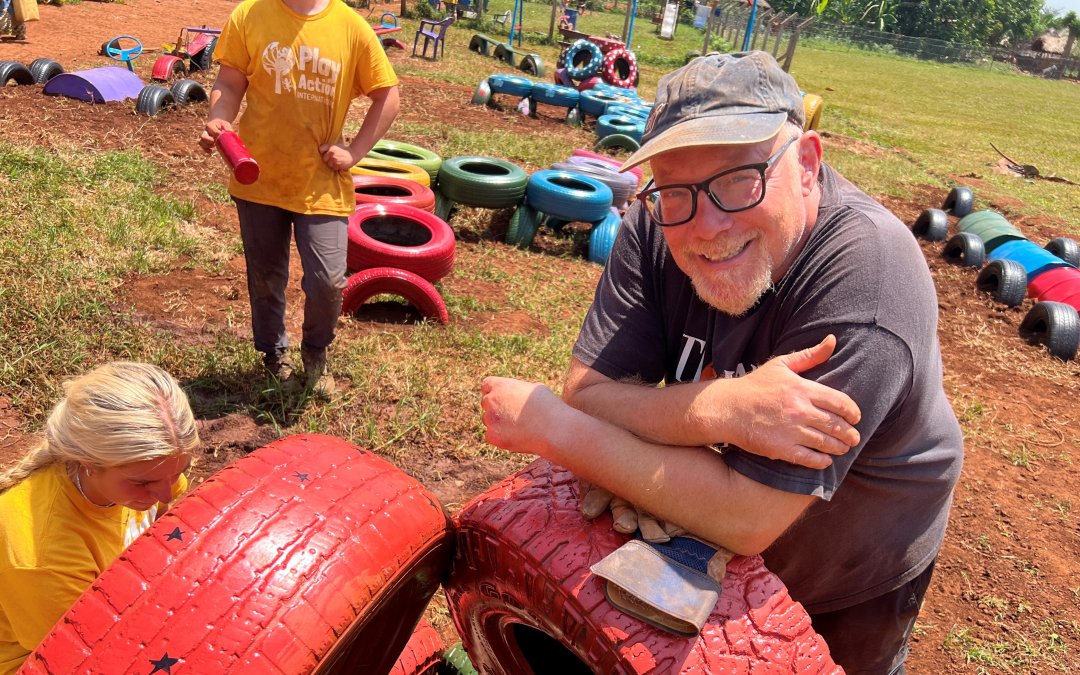 Tim Barber, Yorkshire Society member and volunteer has just returned from a remote Ugandan village having helped to build a playground to encourage children’s attendance at the local school. He tells his story below…

I had seen a post on Facebook from a former work colleague I had not seen in over 35 years. She was planning to organise a trip to Uganda with a charity called Play Action International for adult friends, having previously organised similar trips for sixth formers at the school in Calderdale where she worked.

It sounded so different to what I had done before, it captured my imagination and ticked a couple of boxes with getting to see a country I had not been to before whilst doing something worthy. I mentioned the trip to my wife and she suggested I sign up and go, whilst she would look after our dog.

In some of the more remote areas of Uganda only 1 in 4 children attend a school. The charity Play Action International have found that by building playgrounds as community resources near schools, it helped encourage parents to sign up their children to enter education.

Once I had signed up to the project, I had to raise £1300 to pay for the local build team and the playground resources. By walking the 82 mile Dales Way as a sponsored walk and with very generous donations from friends this was done. I then had a range of jabs and paid for my own flights.

Having checked out the charity, they were very keen to explain there was no “white saviourism” involved, we were just to help support the project by funding the resource and providing free labour for the builders. All our money went into the project and not into administration and marketing. There was to be no expensive luxury accommodation, we were to sleep in a school room at the playground and eat local food.

Having flown into Entebbe airport we were driven to a back packers lodge where we met the other team members. I’d arrived with 5 ladies from Calderdale and we met up with 5 students who had also signed up. The 11 of us set off to the drive to the school, eventually leaving the local highways and driving on rough bumpy tracks.

We arrived in the dark. There was no electricity in the village so with our head torch we were shown to our school room which would act as our dormitory for the next  couple of weeks. A thin foam mattress and a mosquito net were provided and we pulled out our sleeping bags ready for bed. The build team were already there and showed me to the toilet around the back of the building. A hut with a hole in the ground was met with shock by some of the group, but apart from some large spiders and bugs it wasn’t too bad from what I had experienced at Glastonbury Festival!

The next day we slipped into our routines – getting up at 6.30am when it got light, it was great to see the school and field where we were to construct the playground finally. There had already been a hundred old tyres dropped off and a range of scaffolding poles which the skilled builders would turn into slides and swings. 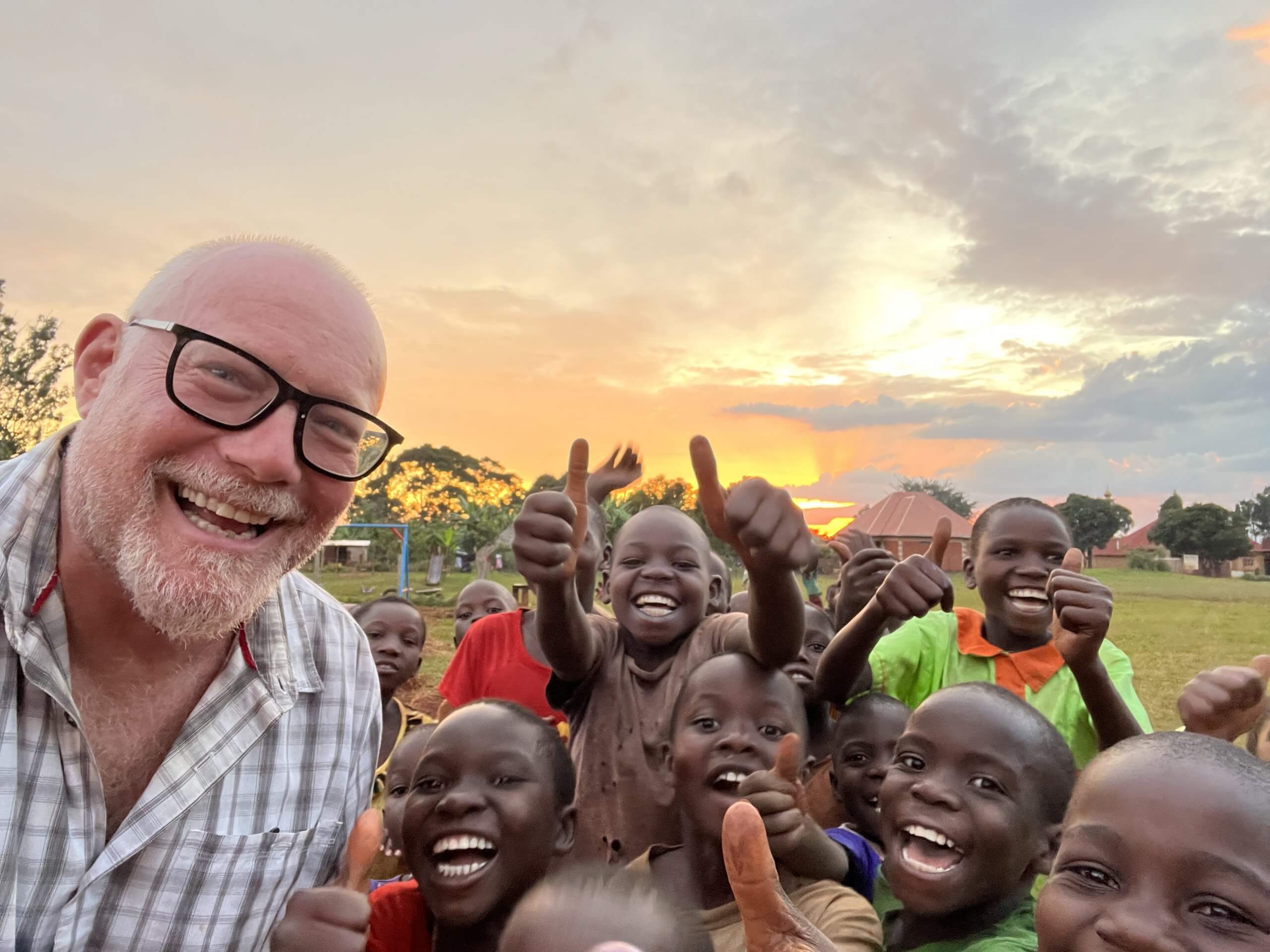 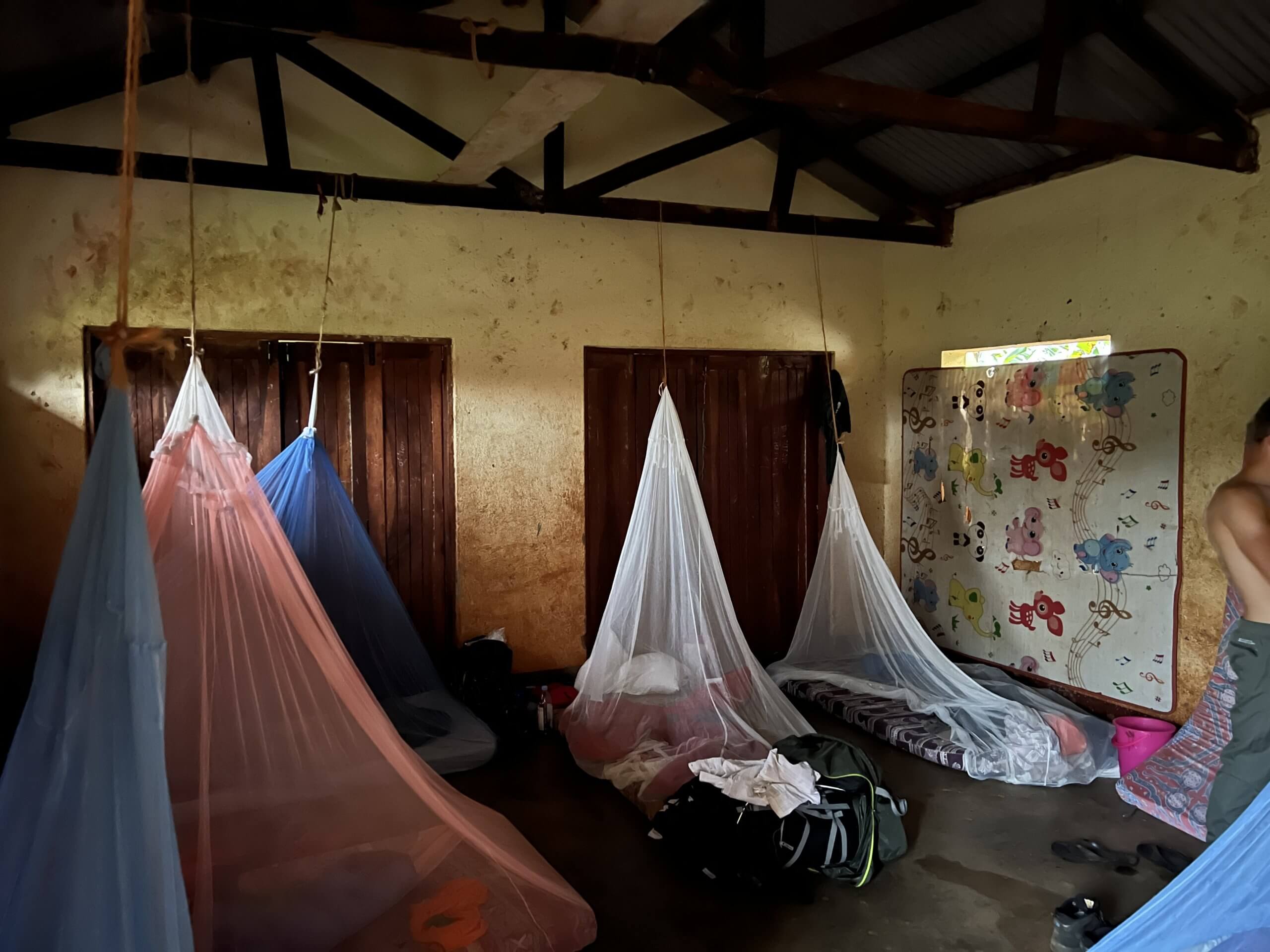 After breakfast we started work. The first few days were just digging 140 holes with picks and shovels – each one had to be a foot and a half deep. This was hard work, especially in 30 degree heat. Within minutes each day I was soaked with sweat. Keeping hydrated was important and I was getting through 6 litres of water plus a day.

We split chores on a rota basis – collecting water from the village pump for cooking, washing up, and drinking. Purifying the water with tablets. Cleaning the dorm, putting out tables and chairs for meals, washing up and more.

The holes were eventually dug, tyres inserted, concrete was mixed and swings erected and the playground started to take shape.

It was great each day to see the progress from our hard work. By the time it got to the evening meal, sometimes your arms were so strained from work that if was difficult to hold your knife and fork.

We were burning lots of calories but one of the highlights of the day was the mid-morning fruit break, with trays of water melon and juicy pineapple to help provide sugar and extra rehydration.

Evening meals were great. Sitting around with the volunteers and local builders with our head torches on, chatting and laughing helped make the trip. The food was a carbohydrate fest, with usually 2 choices of either plantain (savoury green banana), rice, pasta, mash with a vegetarian dish to provide flavour, alternating spicy beans or spicy aubergine which were delicious. 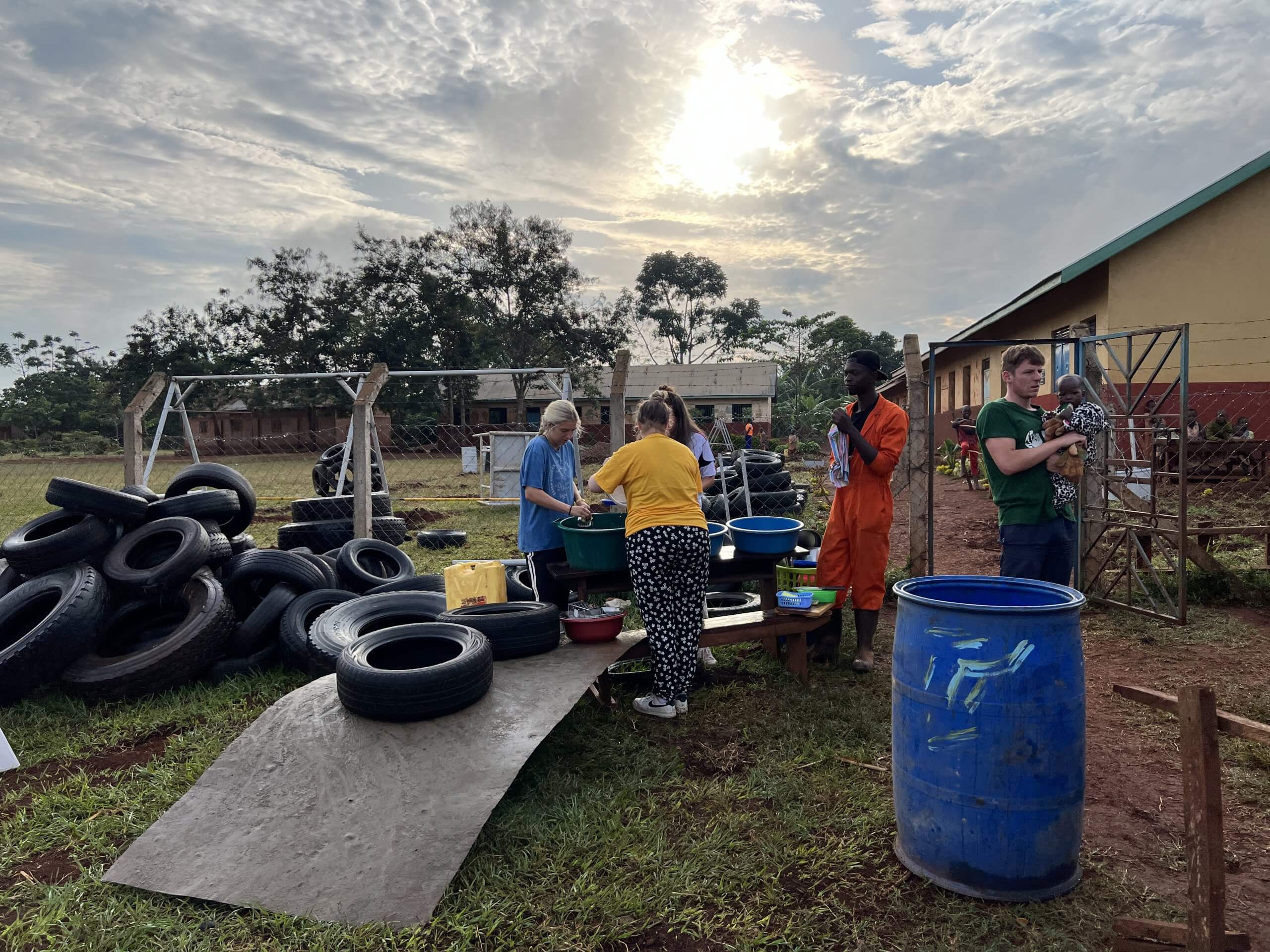 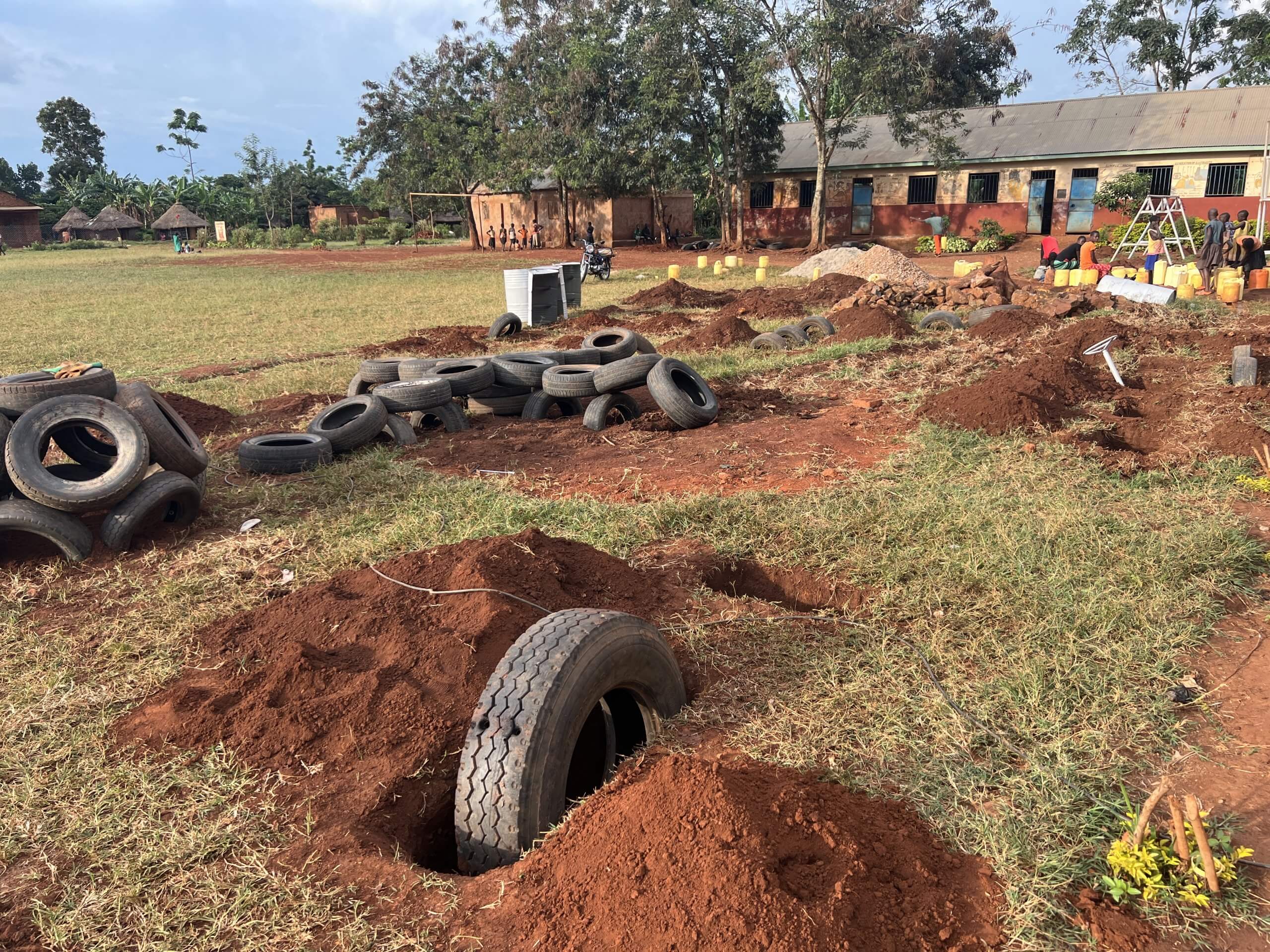 Once we had the equipment in place, we were onto painting – undercoating then painting 188 tyres, shifting earth, moving tons of sand for the sandpit. We had a couple of downpours which knocked us back a bit and meant we had to work longer hours to get the playground built for Open Day.

The day before Open Day we spent some time with the school teachers and community leaders, showing them how to use the equipment for play and education. We also helped run some classroom sessions where children who didn’t attend the school could come in and experience school life.

I will never forget the open day. The whole village came out to see the project. They slaughtered a goat, cooking us a curry, there were hours of speeches from local dignatories, dancing and singing. Then the big moment came. 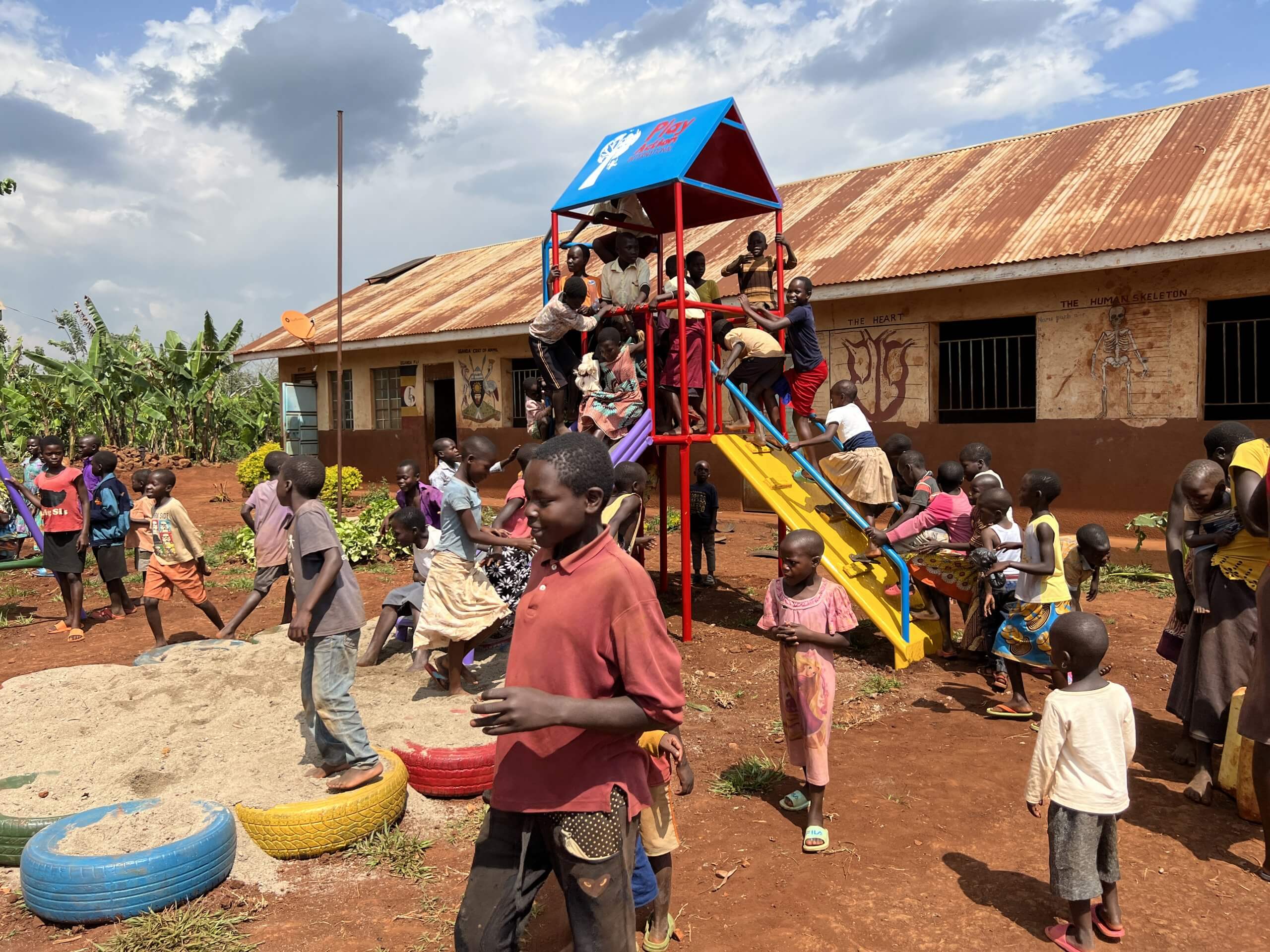 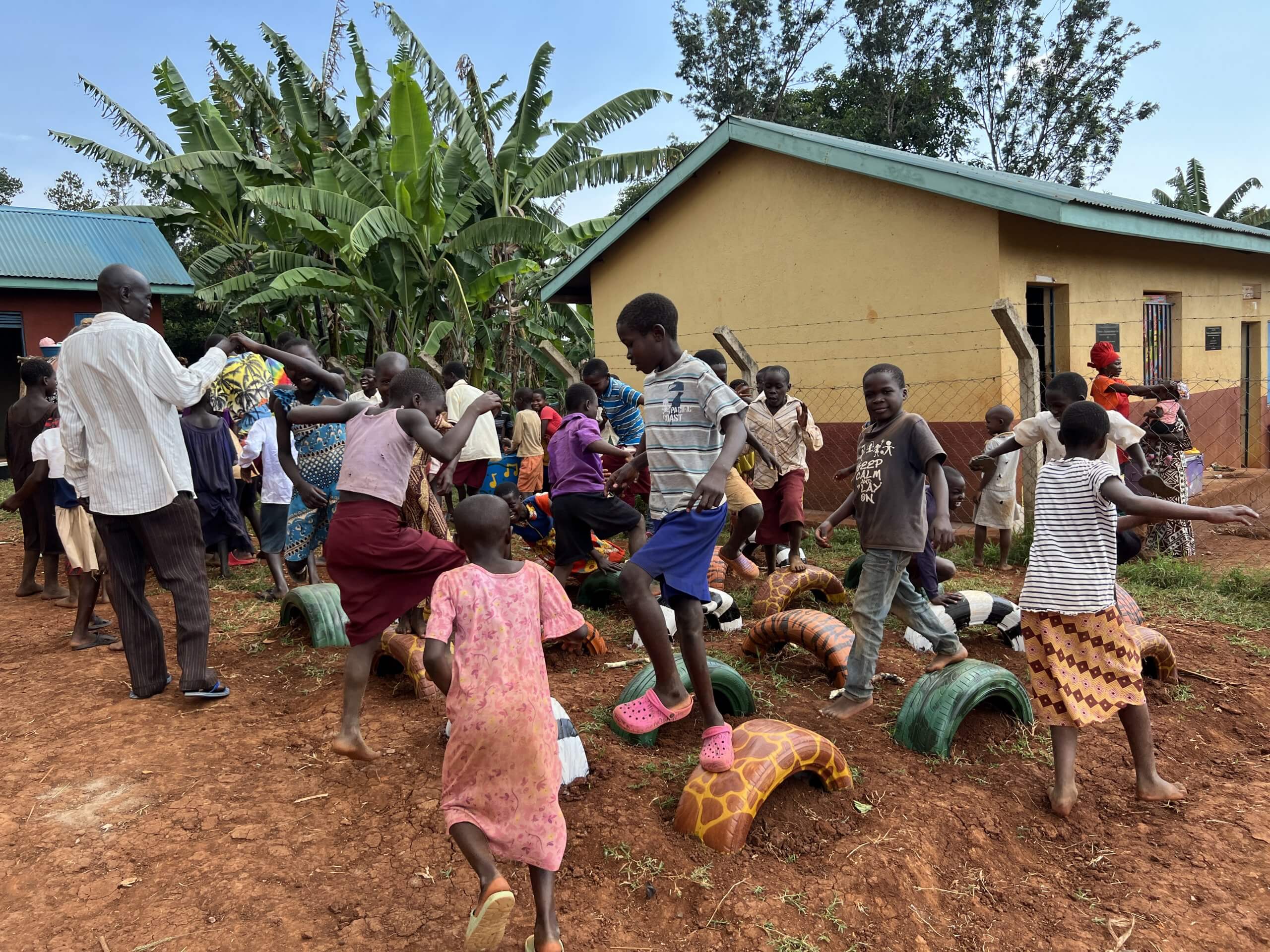 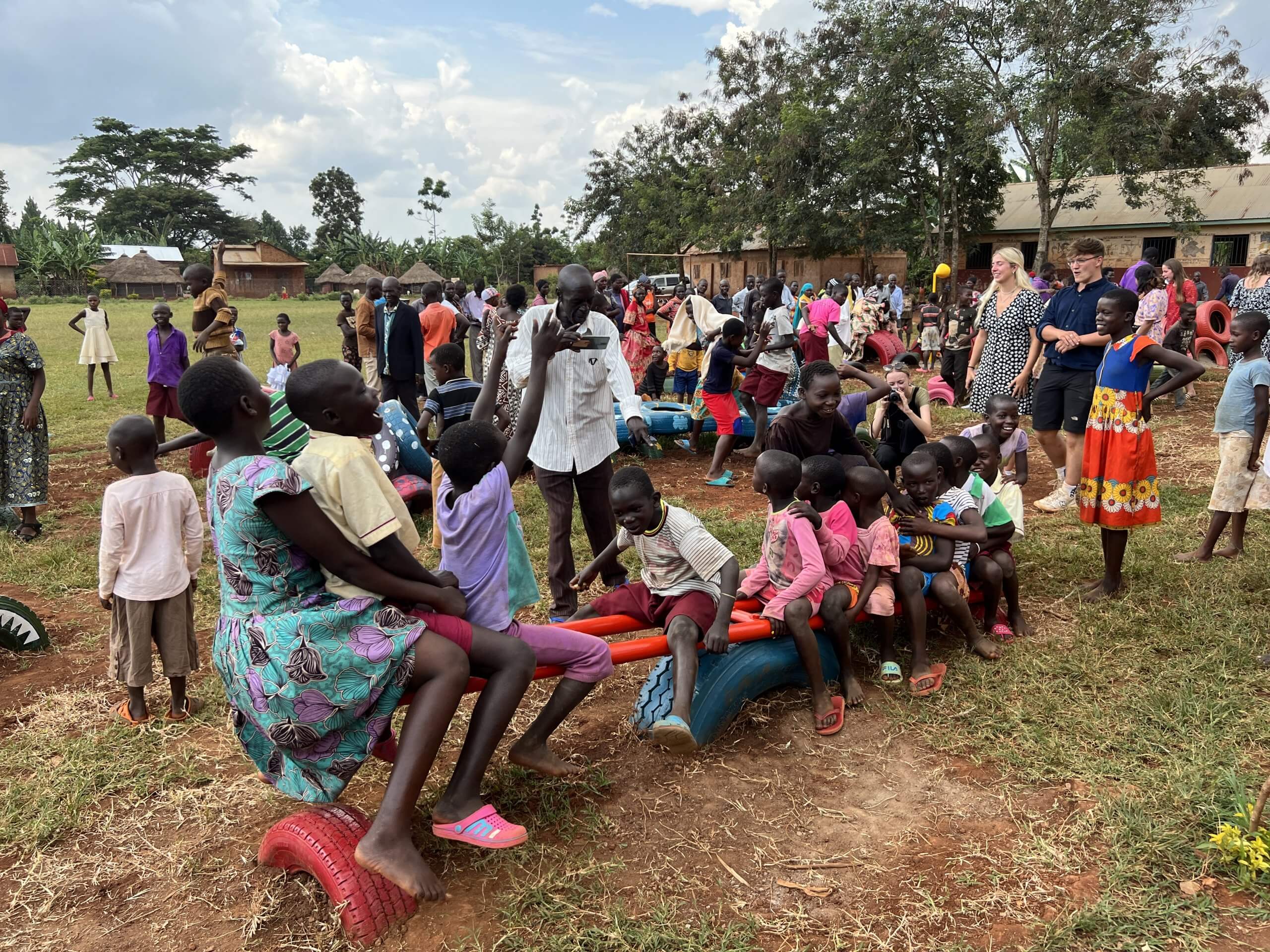 We had put a rope around the playground and the official opening finally took place. Watching hundreds of children run onto the site which had been bare land 2 weeks earlier was such a fulfilling experience. Seeing the joy on the faces of the children bought tears to my eyes. They played until it was dark and were back at sunrise the next day.

It was an experience like no other I had ever had. I wouldn’t call it a holiday, sleeping on a concrete floor and a hole as a toilet was certainly different. But for all the bugs, insect bites, scratches, bruises and aching limbs (I also had a bat fly into my mouth!) I made lifelong friendships, built something from scratch which will have a huge impact to the village not just for play but encouraging kids into education and experienced a new country. I will never forget these few weeks.