The story of the humble Havercake – historic Yorkshire fayre

In these rather difficult times, the idea of making Britain, and Yorkshire in particular, more self-sufficient is gaining ground. Surely, if food imports post-Brexit are going to be more uncertain and expensive, there is scope for growing more of our own basic foodstuffs?

This isn’t a new idea of course and is what has happened in the past, especially in the years before the Industrial Revolution when we couldn’t use our economic wealth to buy cheap wheat, fruit and vegetables from abroad, as we do today.

In poorer areas of Northern England, and this included the Yorkshire Pennines, many of the smaller valley side fields were ploughed to grow basic crops for domestic use, crops such as oats, rye and cereals tough enough to survive in the thin soils, cooler conditions and longer winters of the uplands.

If you look at typical Dales landscapes such as in Upper Wharfedale, in what is now grass pastureland, you can still make out terraced fields with narrow ploughing strips, known as lynchets or reins, that in some cases were created as long ago as Anglo-Norse times.

The basic crop which kept people alive in the uplands until relatively recently was oats.  A tough, adaptable cereal whose grains, suitably milled to oatmeal, could be easily transformed into a highly nutritious food known throughout Yorkshire as Havercake – the word “haver” linked to the German word “hefe” meaning grain or yeast. 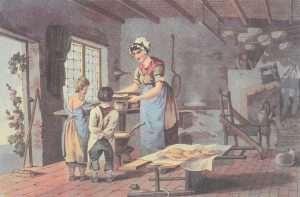 Artist George Walker’s famous book, Costume of Yorkshire (1815), shows a woman in a farmhouse kitchen with her children making oat cakes or to use their correct term Havercakes.

The classic Havercake recipe as described by Walker is for a very thin cake made out of just two ingredients, oats and water, mixed in a large bowel and measured out in a ladle. This is then rolled out to the required circular shape size on a piece of linen dusted with oatmeal.  It is then placed on a hot hearth stone known as a backstone (hence the frequent name “Backstone” in an area where suitable sandstones were quarried, for example, Backstone Gill on Ilkley Moor) and cooked on each side for a just a few seconds and then placed on a linen cloth to cool. 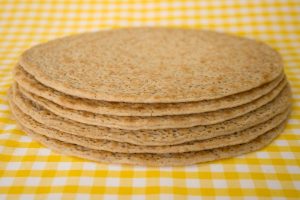 The cakes, still soft, are then hung on a wooden creel or rack, sometime called a “fleeock”, that is suspended from the ceiling, to dry. These racks were a common feature of most farmhouse and cottage kitchens in the Dales and South Pennines in the 18th and early 19th centuries when Havercake was a staple fare.

When fully cool and dry the cakes were ready to eat but could also be carried in a knapsack or pocket out to fields, mines or quarries – the 18th century equivalent of a bread roll or sandwich. Walker notes that making Havercake was almost exclusively a female occupation and any cakes not required for home consumption could be sold to neighbours or strangers for the price of one penny – the size of your Havercake depending on the price of oats at the time, but a useful precious extra bit of income for a Dales housewife.

So popular was Havercake with soldiers from the Duke of Wellington’s 33rd Regiment, men all recruited in and around Halifax, they invariable had supplies of Havercake in their knapsacks when they were on parade or on a march, and so became known as The Havercake Lads.

By the 1830s visitors such as Londoner Fredrick Montague, in his book Gleanings in Craven published in 1838, described how you could buy oval “oatcakes” up to half a yard (18 inches) long at local inns, using a similar recipe and baking technique to that described by Walker, but sometimes enriched by using skimmed or blue milk. The Hopper Lane Inn at Blubberhouses, on the coach road between Skipton and Harrogate, enjoyed an excellent local reputation for its Havercake.

The coming of canals and railways from the 1840s onwards brought cheap wheat supplies to even remote Pennine villages, from the English lowlands and abroad, for commercial breadmaking, and so making farmhouse Havercake largely died out. But it had a new lease of life when housewives, particularly in the industrial West Riding, especially around the Leeds area, hit upon the idea of combining the  traditional Havercake recipe with another more recently available import from the Empire – Barbados molasses or black treacle – to create a much loved, essentially Yorkshire delicacy, we call Parkin.

Mix the flour, salt and oatmeal. Warm the liquid and stir in gradually to make a smooth batter. Crumble in the yeast, stir gently and leave to stand in a warm place for 20 minutes. Stir again and cook in a strong, well-greased frying pan. Pour in enough batter to cover the base fairly thinly and turn out when cooked.