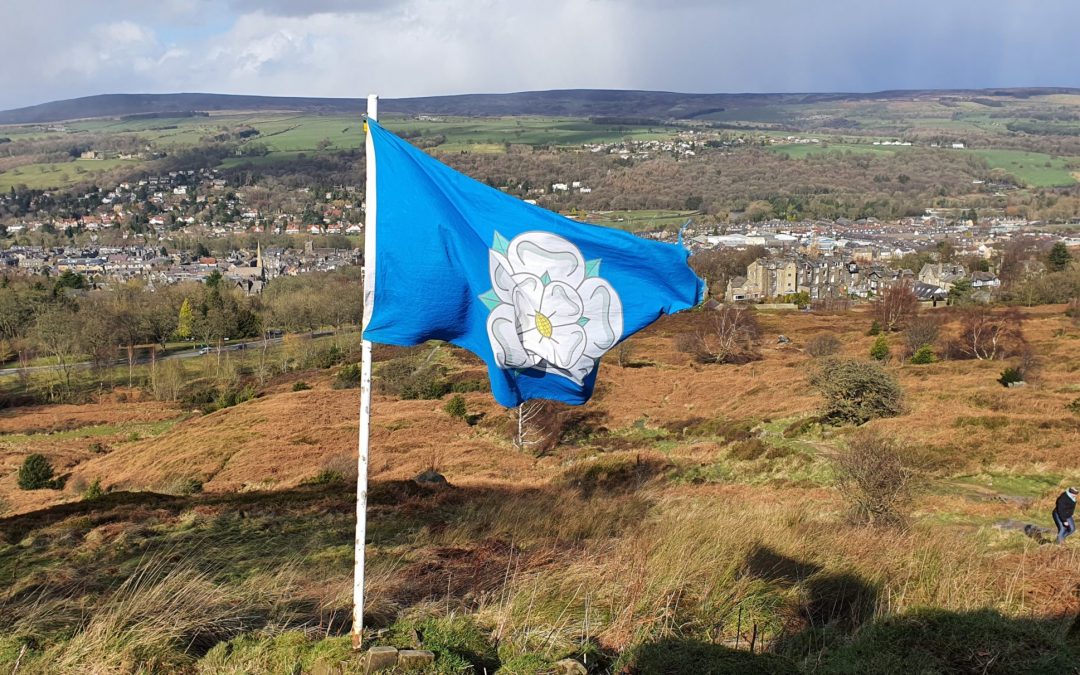 Wherever you go in Yorkshire, sooner or later, you’ll see that blue flag with a white rose displayed proudly on churches towers, town halls, pubs, shops, garages and in gardens of private houses  – just about everywhere. 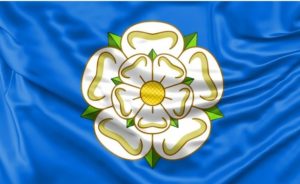 But how did Yorkshire come to have this now familiar and accepted ‘national’ flag, with its white rose on a blue background?

The white rose – “the mystical rose of Heaven” – an ancient symbol of purity with its religious connotations, was used by Plantagenet supporters of the House of York in the 14th century and famously represented one side of the Wars of the Roses.

White roses were also worn by soldiers of Yorkshire regiments, in memory of their fallen comrades, at the Battle of Minden in 1759, on August 1st – the date now established as Yorkshire Day.

The present “white double heraldic rose with green sepals and gold centre” rose we see everywhere, and have all now become so accustomed to, is based on the stylised emblem used in tapestries and illustrated manuscripts throughout medieval and Tudor times. Those white rose illustrations were in turn almost certainly based on the ancient Rosa Alba Semi-Plena white shrub rose, still grown in Yorkshire and elsewhere. You can find more about that in this related article on our website.

The traditional white rose has therefore been around for a very long time, and yet the Yorkshire flag itself is fairly recent; the Tudor rose on a blue background was designed sometime in the 1960s, but was only adopted in 1975 when the newly formed Yorkshire Ridings Society made use of the flag to help safeguard the names and identity of the ancient Yorkshire Ridings, which were abolished in the local Government boundary changes of 1974.

The story goes that sometime after, a proud Yorkshire farmer was summoned (but not eventually prosecuted) for allegedly flying the flag without planning permission. So, the Society had the flag officially registered at the UK Institute of Flags and only then did it become the de facto official flag of Yorkshire, able to be legally displayed in public on any occasion by anyone with a mind to do so, just as you can the Union flag or flag of St. George for example.

But why has the flag become so popular?

First of all, it is not political and, unlike the Union Jack or St George’s flag, it has not been hi-jacked by any political group or extremists for their own purposes. Secondly, in a very real sense, it is a peoples’ flag, suggesting the immense pride of whoever displays it in belonging to, and being from, Yorkshire – wherever they are in the world.

It has in a real and valued sense become part of our Yorkshire identity and togetherness, celebrating our rich, shared culture – a culture that is unique and not about exclusiveness but which, whatever our background or birth heritage, is about belonging.

At a time like the present, when so much seems transient and uncertain, and when so much unintended change seems to be taking place, there is a real need for a sense of the history in which our present is rooted, and our Yorkshire flag does exactly that.

Fly the flag with pride. It symbolises all that is strong and resilient about Yorkshire, its people and provides a symbol of hope to help us emerge from these most troubled times.