What a day? How Keighley did Yorkshire proud on Yorkshire Day 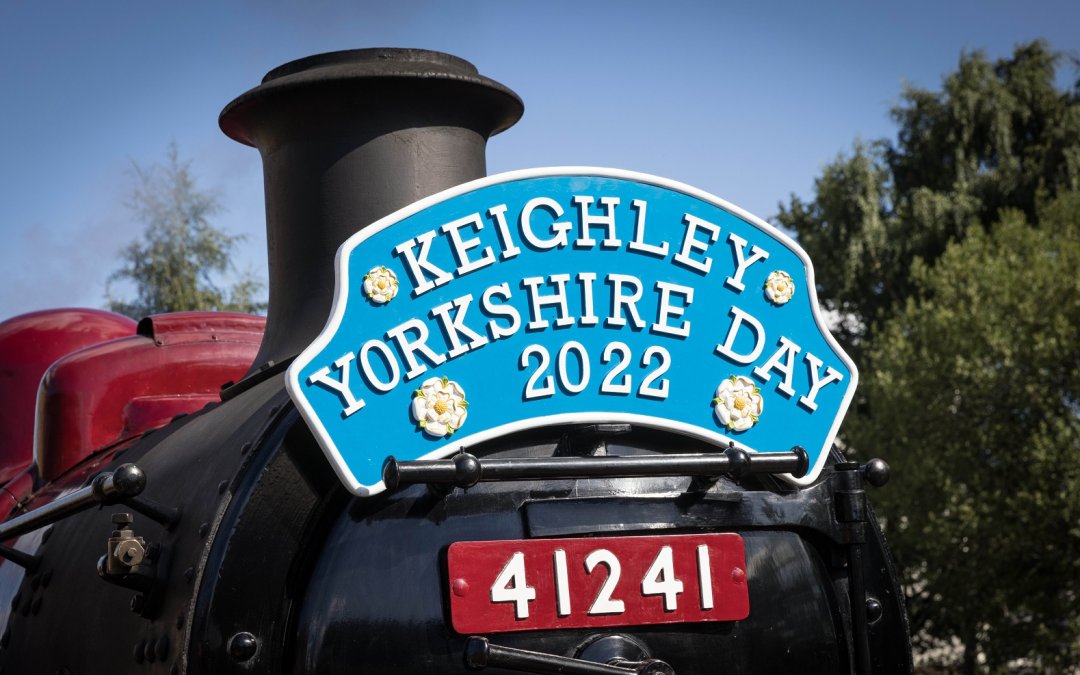 Over 150 specially invited guests gathered at Oxenhope railway station, on a beautiful summer morning, to take a specially commissioned steam train from the iconic Keighley & Worth Valley railway to Keighley station, 4½ mile down the picturesque track.

A sumptuous breakfast on a steam train of one of Britain’s finest preserved railways – a star of several films including two versions of The Railway Children – provided the perfect start to an amazing day celebrating Yorkshire.

Lord Mayors and Mayors from no less than 51 city, town and parish councils throughout Yorkshire, in their robes and chains of office and together with their respective consorts, attendants and mace bearers were present, along with other civic leaders, VIP guests and members of The Yorkshire Society at this important event, which is now an established tradition of growing significance.

And it’s worth remembering that this is believed to be the largest such gathering of mayors in the world! To be a part of it is a privilege for everyone involved.

From the railway station, David Hinde, the Society’s official Town Crier, and the Back Chat Brass Band led the mayors, honoured guest and members of The Yorkshire Society in a parade through the centre of Keighley, with white rose flags being waved in abundance by noisy crowds enjoying the spectacle along the route. There was plenty of bunting and balloons on show too.

The parade took everyone to Keighley’s Shared Church (St Andrew’s), where a service of thanksgiving was held. Of particular note was the arrival of the official Yorkshire Day Flag, respectfully handled by a group of young cadets representing all the forces, and a reading by a young Keighley lass of the famous story of King Solomon taken from the ‘Yorkshire Bible’. Written in Yorkshire dialect, it was delivered with a suitably broad Yorkshire accent.

The theme of “wisdom,” as shown by Solomon and still needed today, was skilfully taken up by Rev Canon Mike Cansdale, Rector of Keighley, in his sermon. After sharing some beautiful images of Keighley’s rich heritage in a slide show accompanied by a soundtrack of Nat King Cole singing What a Wonderful World, the formal handing over of the Yorkshire Day Flag by the Mayor of Keighley to the Mayor of Rotherham took place, and so Rotherham’s preparations for hosting the Yorkshire Day Civic Celebration in 2023 officially started.

After the thanksgiving service was over, vintage buses took everyone from the Parish Church to East Riddlesden Hall. Here, official photographs of all the mayors present were taken. The formal civic lunch then started with prosecco and canapes by the lake followed by the main course of slow cooked Yorkshire beef and a dessert of Yorkshire mess in the Airedale Barn.

As part of the formalities, the Yorkshire Declaration was given, loud and proud,  by David Hinde. Cllr Luke Maunsell, Mayor of Keighley, and Sir Rodney Walker, Chair of The Yorkshire Society, gave speeches of welcome and thanks, respectively. This was followed by Leeds historian and performance artist Catherine Warr – dressed as Halifax’s Gentleman Jack – speaking about the need to both recall and learn from the actions of the great Victorian philanthropists, such as Titus Salt and Andrew Carnegie, and make Yorkshire heritage relevant for young people.

Formalities over, the day ended with a visit to the East Riddlesden Hall itself where National Trust volunteers expertly guiding groups from room to room. The Hall, once home of wool entrepreneur James Murgatroyd during the English Civil War, made a fascinating contrast to the Victorian-era steam railway and mill landscapes of the Worth Valley where the day had begun – two aspects of  Keighley’s rich history linked to both textiles and engineering.

Was it a fun day out? Yes, it was. But more importantly, it was an opportunity for Keighley to showcase itself to the world and for everyone else to demonstrate, in a unique and spectacular way, how Yorkshire’s heritage and identity unites us – bringing together people of different ages, faiths, backgrounds and political persuasions under the emblem of the White Rose and the name of Yorkshire.

So, thank you Keighley Town Council, for a truly memorable Yorkshire Day. You brought us together to celebrate everything that is good about God’s own Country, and you did it with real Yorkshire hospitality and style.

We have some wonderful photos of the day and you can go to the gallery by clicking the button below: