The Yorkshire Society is on a mission to make Yorkshire Day a day when the whole region shows the world how proud we are to be Yorkshire.

So, we organise the centrepiece of Yorkshire Day when all our civic leaders, VIP guests and members of the Society are invited to gather in a host town or city, to mark this special day.

It’s certainly the largest such civic gathering in the UK and possibly the world!

The date alludes to the regimental anniversary of the Battle of Minden on 1st August and the wearing of roses in the headdress on that day.

The date is also the anniversary of the emancipation of slaves in the British Empire in 1834, for which a Yorkshire MP, William Wilberforce, campaigned.

A BRIEF HISTORY OF OUR YORKSHIRE DAY EVENT

Yorkshire Day was established relatively recently in 1975. The nature of the region and its people meant it was quickly adopted and it has grown in significance year on year.

The decision to mark Yorkshire Day with an annual civic gathering of Mayors, Lord Mayors, their attendants and other dignitaries ‘in full costume and regalia’ was taken at a meeting of Local Authorities within the boundary of the old county of Yorkshire i.e. the three ridings and York and The Yorkshire Society at County Hall, Wakefield, on 29 June 1985.

The Yorkshire Society was then charged with guardianship of the idea and organising the annual event, which now forms the centrepiece and focal point for the celebrations undertaken across the whole region.

The ‘Official Yorkshire Day Civic Celebration’ now adds pomp and circumstance to a day of pride for a region which is like a nation within a nation: having its own flag, its own language, own anthem (almost) and its own culture. It is undoubtedly the biggest gathering of ‘first citizens’ and civic leaders in the UK and probably one of the biggest in the world.

The first Yorkshire Day Civic Celebration in 1985 was held in York. Since then the council and Mayor of different towns and cities have had the honour of hosting it. Year on year it has evolved into an established format comprising breakfast reception and robing, thanks-giving service, street parade of all the dignitaries and guests and a formal lunch to finish.

From 2018, when The Yorkshire Society itself began a modernisation, the event has evolved further with the last two hosts, Ripon City Council and Whitby Town Council, expanding it into the community and encouraging the participation of the general public with additional themed elements. As such, the Official Yorkshire Day Civic Celebration is now a catalyst for the host town or city, providing an opportunity to boost the local economy, capture the attention of the world and connect with its citizens.

The host town or city has the honour and prestige of being the official Yorkshire Day town or city for a full calendar year. This is marked with the handing over of the Yorkshire Day flag from council to council on the day, each council adding its coat of arms to the flag to record their year. 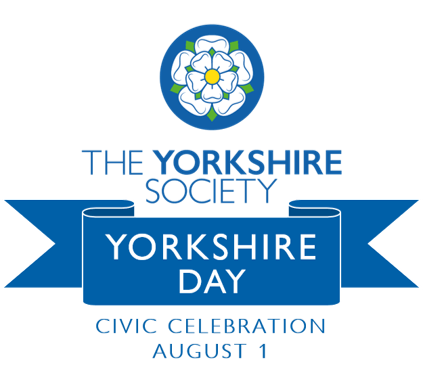 View
“ We are delighted that York has been selected as the host for the 2021 event. York is an incredible city, with a rich and diverse history. As the historic centre of the Three Ridings it has played a truly unique role in the long and exciting story of Yorkshire and we are thrilled to play such an important part in celebrating Yorkshire Day ”.
Councillor Janet Looker, the current Lord

Mayor of York, and its first citizen

Nomination For A Plaque