Whitby pulled out all the stops for Yorkshire Day 2019. 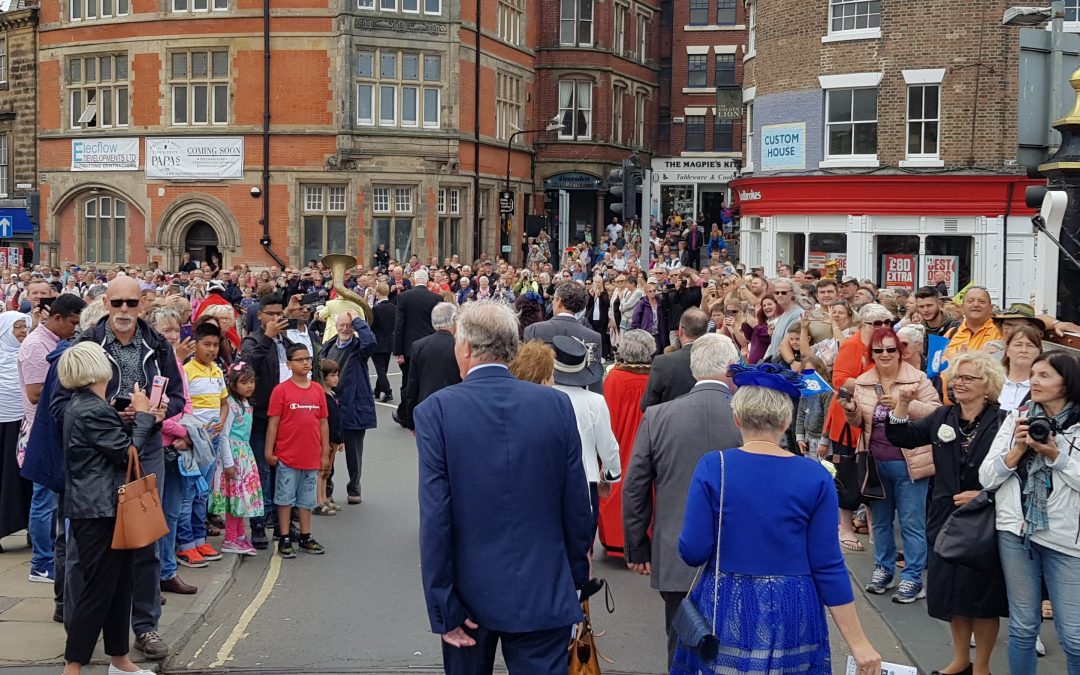 Whitby Town Council and the Society had put a lot of time and effort into the planning of this year’s official Yorkshire Day civic celebration, and it certainly paid off.

Everyone was made very welcome by Whitby Town Council and given the customary fresh white rose on arrival at the breakfast reception in The Star Inn, The Harbour, where the Mayors, Civic Leaders and the Mace Bearers all donned their official robes and chains of office. There were a lot of familiar faces and so a friendly atmosphere was enjoyed by everyone, and it continued all day.

While everyone tucked into breakfast the Town Mayor of Whitby, Councillor Rebecca Pearson, whose chain of office had been specially cleaned and refurbished for the occasion, exchanged greetings with the Yorkshire Society of New Zealand by live skype link. This had been planned to be done from the Captain’s cabin of the Endeavor – the replica of Captain Cooks ship and very appropriate on the 250th anniversary of his first landing in New Zealand – but unfortunately the internet signal was too weak so it was back to the bar at The Star Inn for a stronger internet signal, which was appropriate since New Zealand were twelve hours ahead and had long been ‘celebrating’ their Yorkshire Day, with gusto.

After taking official photos on the quayside it was on to St Hilda’s Church for a service of Thanksgiving and Celebration for Yorkshire Day lead by The Rev’d Michael Gobbett, Rector of Whitby with Ruswarp. The official Yorkshire Day flag was returned by 2018 hosts, Ripon City Council, and formally handed over, for safe keeping, to Whitby Town Council. Contributions in the service came from The Deputy Lord Lieutenant of North Yorkshire – Prof Graham Henderson CBE, Chairman of The Yorkshire Society – Sir Rodney Walker, Councillor Heather Coughlan, Councillor Linda Wild, and representatives of the Church of Whitby. Music was provided by Steve Maltby on St Hilda’s Organ and local band Restore 61. The Rt Rev’d Paul Ferguson, Bishop of Whitby, read the Sermon and the Town Mayor of Whitby – Councillor Rebecca Pearson, gave a truly inspirational story of her battle with Cancer and how it has changed her views on life.

Next was, for some, the highlight of the day – the ceremonial parade through the streets of Whitby to the formal lunch on the harbourside, back at The Star Inn. The parade had a band at the front to lead, and at the back to entertain the very enthusiastic crowds that lined the streets all the way. Here, the efforts of Whitby Town Council were there for all to see as literally thousands of people lined the streets to watch the parade of Dignitaries, Mayors, Civic Leaders and members of The Yorkshire Society. It really did feel like the true community spirit of Yorkshire had come to Whitby and that the public were properly involved in the official event.

The lunch was superb, as you might expect when prepared by Michelin starred chef Andrew Pern and his team in the Dock End marquee. Guests were welcomed with a drinks’ reception and entertainment from Richard Grainger singing Yorkshire songs and sea shanties before our Town Crier read the Yorkshire declaration. Everyone had a gift pack waiting for them at their place and whatever choice had been made from the menu they were not disappointed – the food was of the highest quality and a real demonstration of what an expert can do with fresh, local produce.

To conclude the lunch and bring the event to a close, guest speaker G P Taylor, now a best-selling author gave us an insight into his former life as local policeman and clergyman. His truly entertaining and passionate talk ended with a real call to action for Yorkshire people to take pride and be thankful for the God-given advantage they have been given – being born in God’s own County. It was a perfect way to end what had been a perfect day (so far), and even the weather played its part with bright sunshine illuminating the spectacular view across the harbour, a reminder for everyone there that Whitby is one of the jewels in Yorkshire’s crown.

As the formal civic celebration came to an end, preparations started for the evening where music and a spectacular lazer show entertained the crowds.

Well done and thank you to Whitby Town Council and a special thank you to Town Clerk, Pam Dobson and her team without who the event could not have happened. We’re now already looking forward to Yorkshire Day 2020 and to visiting our civic hosts Rotherham Metropolitan Borough Council.

More photos will be posted as we get them. If you were there and have some to share, please send to contact@theyorkshiresociety.org