Who was and what is “Fat Betty” on Danby Moor?

Whilst training as a Blue Badge Guide and travelling along Blakey Ridge on one of our North York Moors training days – someone pointed down a side road towards Rosedale Abbey and said “and Fat Betty lives just down there”.

I was intrigued. Who was Fat Betty? Was it something to do with a tribute to Mungo Jerry (one for the over 50’s!) or an obese sheep wandering the Moors? On investigation – it turns out it was neither.

I’ve since passed Fat Betty numerous times on my North York Moors & Whitby Tour, stopping with guests to leave a small gift or offering (more on this later). Fat Betty is actually the name given to an ancient Christian wayside preaching cross dating back to the 11th century. 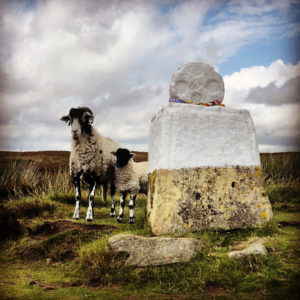 In addition to serving the function of reiterating the Christian faith amongst those who passed the cross and of reassuring the traveller, wayside crosses often fulfilled a role as waymarkers, especially in difficult and otherwise unmarked terrain.

The crosses were often on regularly used routes linking ordinary settlements and on routes having a more specifically religious function, including those providing access to religious sites for parishioners and funeral processions, or marking long-distance routes frequented on pilgrimages. In the case of Fat Betty it is believed that it would have been on a route for visitors from the North to Rosedale Priory. (The village of Rosedale Abbey was home to the priory but no ruins remain today).

Fat Betty is actually a Grade II listed monument, (the cross was sometimes known as White Cross) and was also used as a boundary marker. Standing on Danby Moor, Fat Betty sits at the junction of three Medieval parish boundaries at the meeting of Rosedale, Westerdale and Danby.

It now sits on the Downe Estate and is regularly white washed by them along with other boundary markers on their estate.

What exists today is a cross base consisting of a huge block of local gritstone almost a meter square which tapers slightly to the top. It is understood that there was a cross shaft sitting on top of this which has been lost (or used as a gatepost by a local farmer).

The head of the cross is shaped in a circle about half a meter across with four circular indentations on each side to make it look like a cross, but it does also make it look like a face!. This sort of shaped cross was known as a “wheel cross” and Fat Betty is the only registered cross of this type in Yorkshire.

The fact the wheel cross sits on the huge block makes it look like a squat, overweight figure and is part of the reason the cross is known as Fat…Betty.

There are a couple of myths as to where the Betty part originates. One legend tells us that a nun and her attendant from Rosedale abbey found themselves lost in thick fog on the moor; they were eventually found dead and the cross was set up to commemorate the nun named Elizabeth (or Betty for short). Another legend says that a local farmer’s wife died here. Her husband found her dead body here and set up the cross in her memory – the farmer’s wife was apparently called Margaret or Betty and the cross was originally known as The Margery Cross.

Another bit of local folklore also tells the tale of Fat Betty and another ancient preaching cross close by called Young Ralph. Apparently they are married and travel and meet up after dark when no one is around. As far as I am aware no-one has witnessed this occurance! 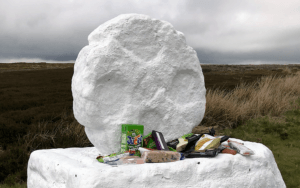 Finally, with these crosses acting as waymarks for travellers there has been a tradition dating back hundreds of years of leaving a gift of some food at the cross in case a traveller in need stumbled on the cross needing sustenance. Every time I stop at Fat Betty, on top of the cross there is always a selection of snacks from mandarin oranges, hotel packs of biscuits, chocolate bars, packs of crisps and sweets left by others. We always continue this tradition and I always keep packs cereal bars and Haribo sweets in my boot for my visitors to leave!

Thank you to Tim Barber (Real Yorkshire Tours and member of the Society).